Rafael Cuevas Uribe and Andre Buchheister, professors of Fisheries Biology at Cal Poly Humboldt, were recently awarded a $150,000 grant from CalTrout, a non-profit conservation group, to help eliminate the invasive species from the Eel River. 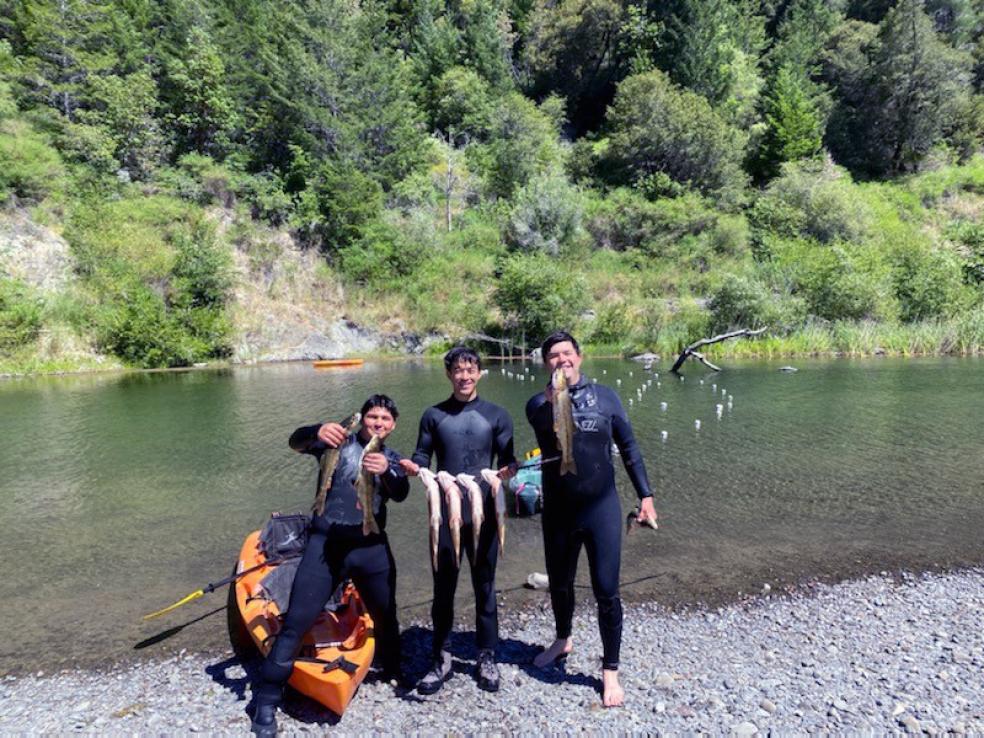 Rafael Cuevas Uribe wants to rid the Eel River of all female Sacramento pikeminnows in order to help the river’s salmon population.

Cuevas Uribe and Andre Buchheister, professors of Fisheries Biology at Cal Poly Humboldt, were recently awarded a $150,000 grant from CalTrout, a non-profit conservation group, to help eliminate the invasive species from the Eel River. They were awarded an additional $67,000 from the California State University Agricultural Research Institute and $40,000 from the Bureau of Land Management (BLM) to support their project. Buchheister says two graduate students, and possibly some undergraduate volunteers, will be involved in the work.

Cuevas Uribe and Buchheister hope to use an aquaculture method of breeding fish that could result in a population of all male fish, keeping the pikeminnow from being able to continue to reproduce. The Trojan Y strategy modifies the genetics of the fish to produce YY males. The researchers will first test the technique in the lab and create models for how it might play out in an actual river population.

Typically, when animals reproduce, the egg provided by the female carries an X chromosome that helps determine the sex of the offspring. Males produce sperm that have either an X or Y chromosome, usually in equal number. An XX embryo is normally female, while an XY is male. However, if males only produce Y chromosomes, as in the modified YY males, male offspring are produced almost exclusively.

Cuevas Uribe, who is also studying seaweed farming methods in Humboldt Bay, is also an aquaculture expert and says this practice is widely used in fish farming to keep fish from expending energy on reproduction. It has not been used much in open waters. He says one effort to control brook trout in Idaho seems to be having some success. He hopes the same will be true of the pikeminnow, which is a particularly hardy fish.

“They can tolerate large differences in temperature,” Cuevas Uribe says. “They can lay 40,000 eggs at a time. They are really good at reproduction.”

Pikeminnow, which can reach a size of 4½ feet, feed on smaller fish and eggs. The Eel River is prime spawning ground for several threatened species of salmon, and the Humboldt researchers, along with others, believe the invasive pikeminnow is impacting those populations.

Cuevas Uribe and Buchheister won’t be dropping YY males into the Eel River anytime soon. The grant money will allow them to first study the method and develop the YY males in a lab on campus, with a population of about 200 fish. They say it will take some time to develop a population model to examine how effectively this approach could eradicate the invasive pikeminnow. If the models are successful, they plan to eventually introduce the modified fish into the river environment.

“I don’t want to say we’re going to save the salmon,” Cuevas Uribe says. “It’s too early to tell. But I’m pretty confident this method will work. If it does make a difference, this could be implemented to other invasive species in other settings.”

Cuevas Uribe says the effort to reduce the pikeminnow is in collaboration with Cal Trout, the Wiyot Tribe, environmental consulting company Stillwater Sciences, BLM, and other local state and federal agencies.