For her second solo recital as a faculty member of the "HSU Music Department":http://www.humboldt.edu/~mus/index.php, pianist Ching-Ming Cheng plans to take the audience on a journey: “chronologically, technically and musically.”

In her Oct. 25 performance at Fulkerson Recital Hall, she begins with the F Major Piano Sonata by Mozart (Piano Sonata #15). “By starting with Mozart, I’m trying something different. This is a very relaxing and peaceful piece in three movements. It’s not emotionally overloaded, so it can create a receptive mood for the rest of the concert.”

From Mozart, she proceeds to the Ballades by Frederic Chopin. “I know people think Chopin is overplayed, but he’s still the favorite composer of a lot of people, and I think going from Mozart to Chopin is interesting. We go from really pure and simple music with a lot of delicacy, to the very emotional and expressive Chopin.” 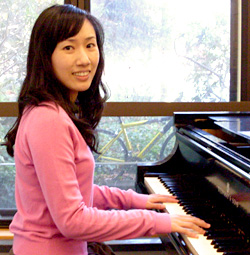 It also represents a move from the classical period to the mid-19th century romantic era. The second half of the recital features a suite by the early 20th century impressionist—and Ching-Ming Cheng’s favorite composer: Maurice Ravel.

Probably the most ambitious piece on the program, Ravel’s Miroirs (or Reflections) is in five parts: each is meant to evoke a visual image as five individuals look into the mirror.

The first is called Noctuelles (or Night Moths). “It’s a little anxious,” Cheng says, mimiking the flight of the moth. In the second (Sad Birds), “the notes go very fast, describing the sounds the birds make.” The third is A Boat on the Ocean, which suggests the ocean and the movement of a boat on the waves. “It’s very vivid—and also very demanding technically.”

The fourth piece in the suite, Alborada del gracioso, is the only one Cheng has performed before at HSU. “This one is about a clown playing tricks, and I feel like the composer was playing tricks on the performer, because it’s very tricky to play.”

The last section is The Valley of Bells. “It’s interesting how Ravel would end this magnificent suite with a slow, dreamy, quiet movement, especially after the dazzling and difficult clown piece. I’m hoping the audience enjoys it—I’m sure they’ll enjoy the harmony, but I hope they’ll be able to follow the melody in these long phrases. That’s the hard part about playing this piece.”

“The musical style of Ravel is so delicate,” she concludes. “These five pieces are considered some of the most difficult of all times in the piano repertoire. There are so many notes on the page but when you play them, they sound so pleasant and easy and light. So achieving that delicacy is the difficult part about playing Ravel, but that’s also the amazing thing about Ravel. He’s actually my favorite composer.”

The last piece on the program is the Piano Sonata # 1 by twentieth century composer Sergei Prokofiev. “This sonata has only one movement, but it starts with a fast section, then slow and then fast again, implying three movements. To me this sonata feels like a rhapsody, or even an improvisation. There are so many musical ideas running around all over the place! This is another demanding piece to play, but from a totally different perspective than the Ravel. For this one I need a lot of powerful touch on the piano, and lots of jumping and leaps.”

“I planned this program chronologically,” she concludes, “but it’s actually a pretty complete and thorough program technically and musically, too.”

Pianist Ching-Ming Cheng performs this program on Saturday, Oct. 25 at 8 p.m. in Fulkerson Recital Hall on the HSU campus. Tickets are $8 general, $3 students/seniors from the HSU Box Office (826-3928) or at the door. This is a Faculty Artist Series concert produced by the HSU Department of Music. More information: http://HSUMusic.blogspot.com.