Fire Lab on the Cutting Edge

"When I came to Humboldt people kept saying, 'You'll like our fire table.' I was thinking, 'What the heck is the fire table?' says Professor Morgan Varner, a fire scientist at HSU. "So, when I came into the Wildland Fire Lab and they lowered the hood I thought, 'Oh, wow, this is perfect!'"

In fact, Humboldt State is one of only three schools in the nation, along with Western Washington University and the University of Idaho, to house a true fire lab with a fire platform and ventilation hood.

"Committing to a chemical lab is pretty easy because lots of different people can use it," Varner explains. "But, if you're committing to a lab like this you're really committing to a fire program because this room is only designed for fire research."

Indeed, Humboldt State has become one of the country's top fire science institutions. Aside from a fully equipped lab where students can burn wildland fuels and study fire behavior, the lab also makes use of a new thermal imaging camera. The camera yields remarkably accurate, pinpoint information concerning time and temperature, allowing fire scientists like Varner and his students to better understand fire behavior. In concert with the fire lab, the $60,000 camera gives students and faculty access to the types of cutting-edge technologies being used at the highest levels of fire science. 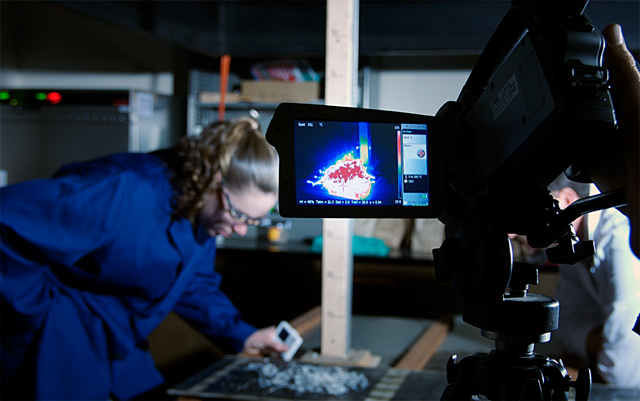 "There are two approaches to fire research. One is a large scale model where we look at landscapes, and then there's the small-scale stuff, the reductionist, old school science that we do here in the lab," Varner says. "We are trying to learn why a specific phenomenon occurs, what the mechanism is. We control so many different things in a lab setting that we can figure out what drives flammability or why different plant communities burn the way they do."

"I'm trying to find out if the presence of an oak canopy is changing fire behavior and intensity," says Engber, who is in the lab burning fuels collected at his study area in the Bald Hills of Redwood National Park in northeastern Humboldt County. "If the fires are burning hotter in the grassland, then they might be limiting oaks from encroaching on the grassland and limiting Douglas-fir seedlings from coming into the oak stands."

Learning in some of the world's most amazing forests and studying in one-on-one settings with professors who are experts in their field have helped make HSU a national leader in fire science.

"I came here because of this guy," Engber says as he motions toward Varner. "The forestry program here is great and the location is awesome, but I mainly came here because I wanted to study with Professor Varner."

See the full story about wildfires and HSU’s fire science program in the Spring issue of Humboldt Magazine coming out next week.