They swam, they rafted, they hiked, they camped out under the stars, and they got college credit. A group of students spent 12 days of clambering in and around the Klamath River in July, learning about restoration, natural history, and traditional ecological knowledge. 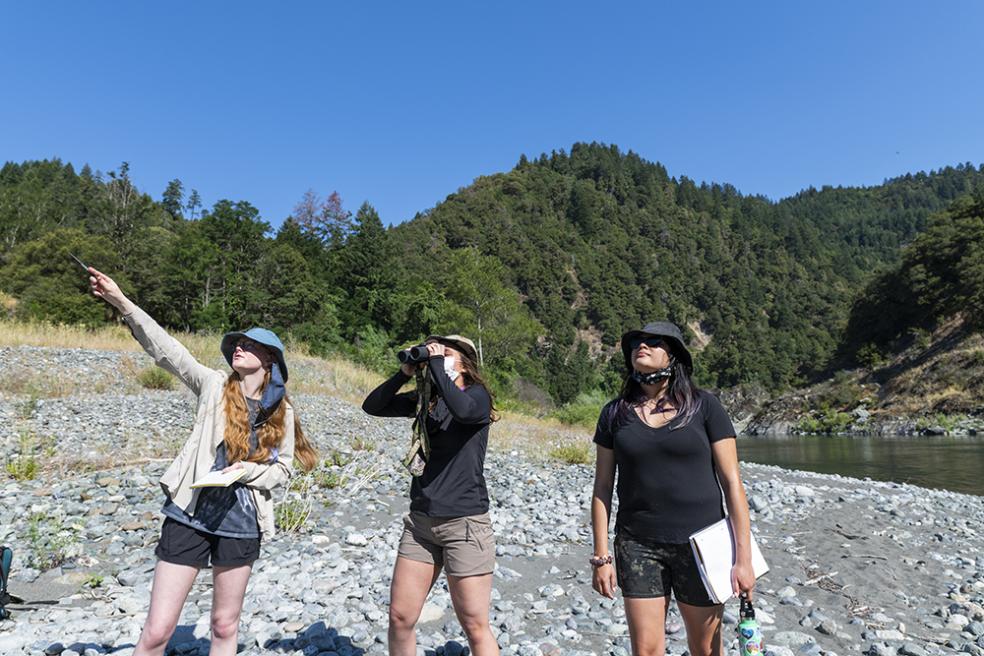 This past summer, Cal Poly Humboldt students traveled to the Klamath River for a unique 12-day field course.

They swam, they rafted, they hiked, they camped out under the stars, and they got college credit.

The activities were part of a first-time Cal Poly Humboldt course organized by Environmental Science & Management Professor Alison O’Dowd and biologist Mason London. O’Dowd led the group through 12 days of clambering in and around the Klamath River in July, learning about restoration, natural history, and traditional ecological knowledge.

Kloe Walter was among 14 students who took the course.

"I've never felt so connected to a place, the environment, and my passions before," says Walter, an Environmental Sciences & Management major.

Donning wetsuits, masks, and snorkels, the students submerged themselves in the river to identify and measure local salmon, trout, and other aquatic life. They built shade cover for fish, met with local tribal representatives to better understand ecological and cultural issues, and learned about the impact of the impending removal of the Klamath River dams.

O’Dowd says one of her former graduate students suggested the course after being involved with teams of students measuring rivers in and around the Klamath Basin. Both saw an opportunity to provide students a unique learning experience, and were pleased enough with the results that they plan to offer the course again next year. The Klamath Basin has numerous ecological issues, including restoration of salmon populations, reparation of river biomes, protection of native sites, and the largest dam removal project on record.

O’Dowd says most of the students in the group were ESM majors, but there were also students majoring in Wildlife, Biology, and Botany. There was something for everyone, she says.

“It was all super hands-on,” she says. “Each day, we met with a different group of people at a different location. We didn’t always know exactly what they were going to show us. A lot of it was a surprise. But it was a lot of good surprises.”

Students not only engaged in field activities, but also met with professionals working in environmental science. The groups they encountered included public and private conservation agencies and representatives from the local Yurok, Karuk, and Hoopa Valley native tribes.

“The Klamath Basin field course gave me the energy to feel passionate about finishing my biology degree and applying my knowledge to real-world problems and restoration projects,” Bailey says.

“The students could see it’s not impossible to get these jobs,” O’Dowd says. “They were connecting with people, and we were teaching them how to network. It all starts to make sense."