He hasn’t developed a new theory that contradicts Newton and Einstein, but Dave Smith has discovered something valuable through his work in the Humboldt State Gravitational Research Laboratory.

“I’ve gained an inkling about how research works,” said Smith, who is scheduled to graduate from HSU in May. “It’s what I’m going to experience in graduate school. I have a good idea now of what to expect.”

Smith is one of eight current undergraduates getting a head start on other would-be graduate students by participating in gravity research under the direction of Professor C.D. Hoyle. Funded through a grant from the National Science Foundation, the program continues to provide undergraduates with meaningful opportunities to learn. 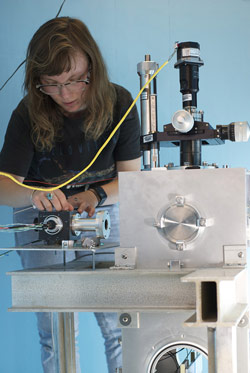 Next up for Smith and his student colleagues is a presentation of their studies at the National Conference on Undergraduate Research, an event hosted by the University of Kentucky on April 3-5 in Lexington, Ky. Hoyle, Smith, and students Crystal Cardenas, Conrad Harter and Holly Leopardi will present again at the April 5-8 meeting of the American Physical Society in Savannah, Ga.

“When I go to a conference I realize the big picture,” said Leopardi, currently in her sixth semester of participation. “The first time I went, gravity wasn’t a hot topic. There’s a lot more interest now. That means there’s a good chance more people will be looking at our research, and that new or similar experiments are likely to come out of it.”

Started in 2007, Hoyle’s program usually includes three or four students who have completed core physics classes and indicated an interest in gravity research. This spring, eight students are participating as one group of four transitions out while another takes over.

A typical session in the lab might involve designing software or even manufacturing components needed to put gravity to the test in a controlled environment. If a physical part isn’t available in near-complete form, students design, engineer and construct it.

“Sometimes it requires brute force,” Hoyle said. “We’re regularly assembling or disassembling the equipment. You can’t buy these circuits that we use; you have to build them.”

The first wave of funding – a two-year NSF grant – helped cover the greatest hardware needs, from computers to a vacuum chamber and torsion pendulum. Funding from a three-year, $155,746 continuation grant secured last spring is sending students to conferences and paying costs associated with summer internships.

Though the process itself is a key outcome for involved students, the overall focus of HSU’s gravity research remains the same: Identifying the effects of gravity at a very close distance – less than half the width of a human hair – and perhaps gaining an understanding of why theories in the physical world sometimes collide.

“Fifteen years ago nobody had observed gravity closer than a millimeter,” Hoyle explained. “They just assumed it worked. Now we’re looking at a distance of 50 microns, but that’s still big when you compare it to atomic size.

“The bigger issue is, when you combine relativity with quantum physics, they don’t work together. We have to then consider, at what level do we need to begin to worry about that?”

In scientific time, those kind of measureable results may take decades to reveal themselves, or more likely, may never come to fruition. That notion only makes the experience even more important to undergraduates, who will participate in only a small segment of the project’s research.

“If we detect an anomaly, we have to determine why and see if it explains something. You have to go back and reassess the process, which in itself can take a long time,” Hoyle said. “Eventually, it may be that another group (of students) proves otherwise.”

“As an experimentalist, you have to go in with the attitude of you do the research, and nature will reveal itself,” Hoyle said. “But you have to be cautious in interpreting outcomes. It’s often more about getting students the experience even if the result isn’t world-leading.”