Scientists always assumed it was a northern flying squirrel gliding through the canopies of Pacific coastal forests. 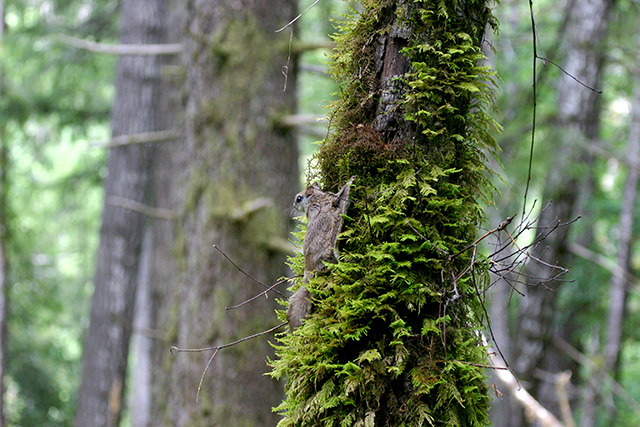 But now a recent in-depth investigation of the animal’s DNA is proving otherwise. The furry critter is actually a distinct species, which has been named Humboldt’s flying squirrel, and a new study describes how scientists are up-ending flying squirrel taxonomy.

“For over 200 years scientists have thought that only two species of flying squirrels live in the Americas,” says Brian Arbogast, a University of North Carolina at Wilmington professor who directed the study “Genetic Data Reveal a Cryptic Species of New World flying squirrel: Glaucomys oregonensis,” published in the Journal of Mammalogy. Arbogast was formerly a professor at Humboldt State University’s Department of Biological Sciences and head of the University’s Vertebrate Museum.

How could a distinct species exist along the Pacific coast and escape the notice of scientists who first observed the northern flying squirrel in 1801?

“They look similar, but Humboldt’s flying squirrels are generally smaller and darker. With new genetic information we know that there’s no gene flow between the two,” says Nick Kerhoulas, HSU Biology instructor and a member of the research team.

Humboldt’s flying squirrel is what scientists refer to as a “cryptic” species, one that was not earlier recognized as being distinct based on its physical appearance. “If it had been something as obvious as a bushier tail, or distinct markings, scientists would have identified that already,” says Kerhoulas.

The research team analyzed the DNA of northern flying squirrels from across North America, with an emphasis on the Pacific Coastal region of the continent. Researchers combined information from mitochondrial DNA sequences and information from a different type of DNA marker, known as microsatellites, which are short repetitive stretches of DNA typically found in the nuclear genome that can help scientists identify levels of gene flow among populations.

The new species is Glaucomys oregonensis, but the researchers gave it the common name “Humboldt’s flying squirrel” in honor of German explores and geographer Alexander Von Humboldt, and in a nod to the Northern California county that bears his name, says Arbogast.

Western scientists have studied flying squirrels in North America for well over 250 years. In 1758, Carolus Linnaeus, father of taxonomy—the formal system of assigning every species a unique, two-part Latin scientific name—bestowed the scientific name Mus volans, which translates to flying mouse, on what is known today as the southern flying squirrel.

The Latin name was later modified to Glaucomys volans, which has remained the same ever since. This species lives across much of eastern North America, primarily in deciduous forests. The range of this species extends further southward into the oak and pine forests in mountainous regions of Mexico and Central America.

Another species, the northern flying squirrel, Glaucomys sabrinus, was formally described in 1801 and is generally larger than Glaucomys volans. The northern flying squirrel has an expansive range across the vast coniferous forests that cover much of Alaska and Canada, from where it extends southward in similar habitats through the major western mountain ranges of North America: the Rockies, the Cascades, the Sierra Nevada, and also the highest peaks of the Appalachian Mountains in the east.

The creatures don’t actually fly like bats or birds. Rather they glide from tree to tree by extending furred membranes of skin that stretch from forearm wrist to ankle on the hind leg. Their feather-like tail provides extra lift and also aids in steering.

They are capable of gliding for up to 100 meters and can make sharp, mid-air turns by using their tail as a rudder and moving their limbs to manipulate the shape and tautness of their gliding membranes.

These aerial feats are even more remarkable given that flying squirrels often have to navigate through dense forest in the darkness of night. Their large eyes give them excellent vision, but the mechanisms of their navigation and judgment of distances while gliding remain largely a mystery.

Full text of the study is available online.