Growing up in San Ramon, California, Benjamin Hoffman (‘00, Journalism) was naturally an Oakland A’s fan. But his childhood dream was to be a writer. 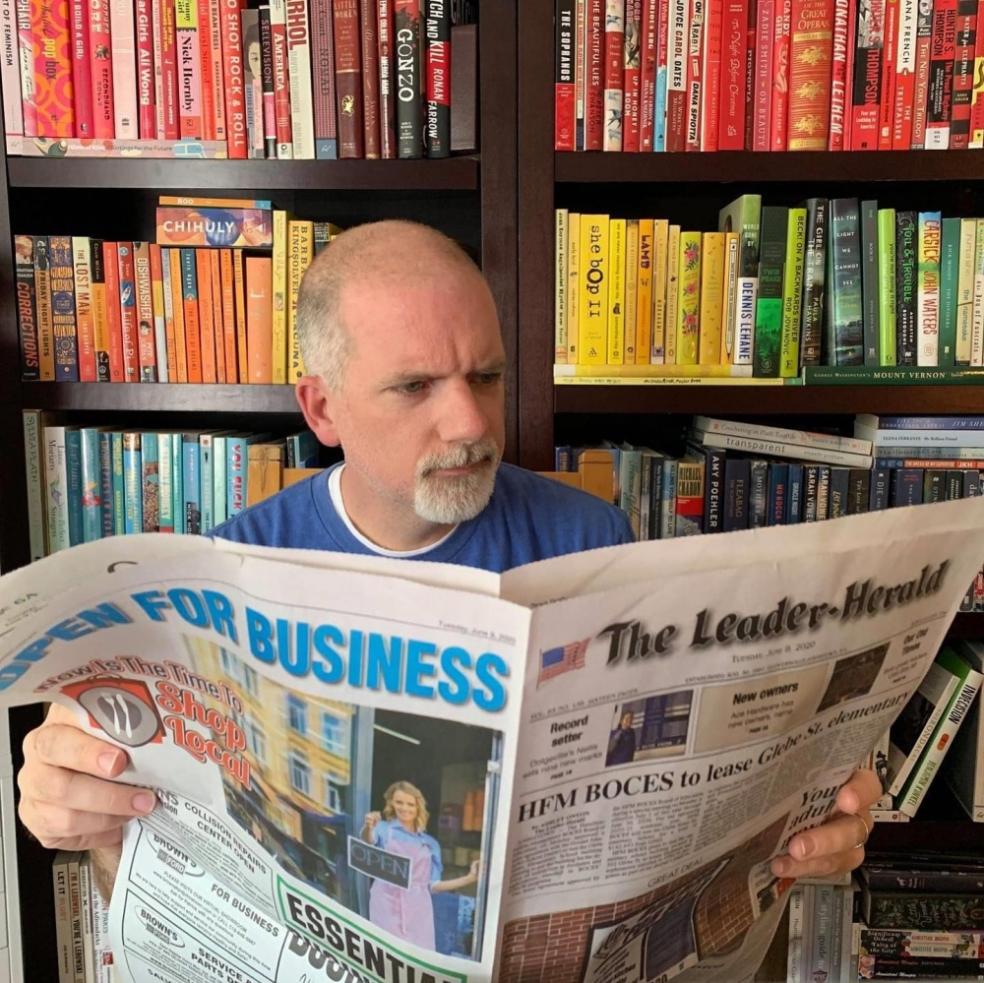 Growing up in San Ramon, California, Benjamin Hoffman (‘00, Journalism) was naturally an Oakland A’s fan. But his childhood dream was to be a writer. As early as 7 years old, he remembers his aunt bringing him newspapers and magazines to pore over. He would even make his own zine-like publications, mostly about his favorite comics, to distribute to family and friends.

Today, Hoffman is a senior editor at The New York Times. Looking back at his two decades in journalism, Hoffman says that his career as a newspaperman was “predestined.” But it doesn’t mean it was easy.

Hoffman kept up with his zeal for writing through high school and chose to attend Humboldt State for the University’s undergraduate journalism program. In Arcata, he immersed himself in the campus and community: living in Cypress Hall, eating meals at the J, cheering on the Crabs, hosting a show on KRFH radio, editing the student-run Osprey magazine, and reporting for the Eureka Times-Standard.

“Working in local media as an HSU student was the best hands-on learning experience I could have asked for,” says Hoffman. “It’s where I learned to lay out a page, take photos, and edit my own stories.”

Hoffman was also greatly influenced by the late HSU journalism professor George Estrada. A former writer for the Oakland Tribune, Estrada encouraged his students to cover what they cared about. “He taught us how to discover our voice by finding ‘our thing,’” says Hoffman. “He was a friend as much as a professor.”

After graduation, Hoffman got a job on the copy desk for Bay Area News Group (formerly, ANG), cashing in on his hard-won lessons learned at HSU and the Times-Standard: “Do any job, learn every skill, and no one else will do it for you,” says Hoffman. “These are still the principles I follow today.”

After a few fast years at ANG, Hoffman moved to New York City to chase his “big journalism” dreams. With nothing but a couple suitcases and a friend’s couch to call home, Hoffman snagged a job at a textiles magazine (ask him about thread counts) but quickly grew bored with the 9-5 life. When a door cracked open to a part-time gig at The Times, Hoffman said, “I’m your guy.”

“I was a page designer nights and weekends,” remembers Hoffman, who worked both jobs seven days a week, until The Times came through with a position on their sports desk. He got to work and started living and breathing baseball, covering the minor league for his first assignment.

Today, Hoffman has written thousands of stories for The New York Times. He’s covered 12 Super Bowl games in person—including the sparsely-attended 2021 edition—along with the World Series, the NBA Finals, and numerous All-Star games. Recently, Hoffman has written about convergence between sports, racial justice, and the pandemic.

Despite finding incredible success in a challenging field, Hoffman remains humble and hardworking. He tells aspiring journalists to keep an open mind about their career and say yes to every opportunity. “The straight path to the top doesn’t exist,” says Hoffman.

Oh, and try asking the baseball editor of The New York Times, “Yankees or Mets?” He's quick to answer, “A’s!”