Ocean Acidification a Challenge for Shellfish in Humboldt Bay

A sophisticated ocean chemistry-monitoring instrument installed last year has given researchers some preliminary results—and cause for concern.

A sophisticated ocean chemistry-monitoring instrument installed last year has given researchers some preliminary results&#8212;and cause for concern. 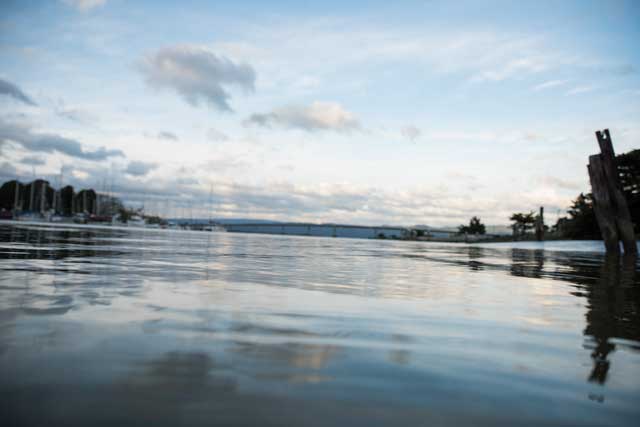 The “Burke-o-Lator,” set up at the Hog Island Oyster Company’s hatchery on Humboldt Bay, examines ways seawater chemistry is being affected by ocean acidification. Unlike other oceanographic sensors that measure only acidity (pH), the Burke-o-Lator also collects information on seawater’s carbonate saturation state, which shows how difficult it is to build and maintain shell—directly related to the growth and development of shellfish. That data is made publicly available and streamed live at the Central and Northern California Ocean Observing System (CeNCOOS) website.

You can read more about the Burke-o-Lator here.

The installation of the Burke-o-Lator is part of a larger project that is being conducted by a research team that includes Humboldt State University professors Jeffrey Abell, Frank Shaughnessy, and Paul Bourdeau. They are being assisted by of host of HSU graduate and undergrad students who are gaining firsthand experience in this exciting research and the use of this state-of-the-art instrument.

“The initial data is interesting, and a bit concerning. Though water in the Bay is less acidic than the nearby open coast, the carbonate saturation is still frequently low enough to cause problems for juvenile oysters and larvae,” California Sea Grant Extension Specialist Joe Tyburczy. “Based on this data, the Hog Island hatchery has begun buffering the seawater they pump into their facility with sodium carbonate to increase the saturation state and pH, protecting their juvenile and larval oysters and helping them grow.”

Tyburczy’s team, which includes Humboldt State researchers, has deployed oceanographic instruments inside and outside of eelgrass beds and will analyze water samples with the Burke-o-Lator to understand the capacity of eelgrass to chemically modify seawater as it moves through eelgrass beds with the tidal cycles.

“Interestingly, preliminary data from other regions indicate that eelgrass may not be doing as much to boost pH and carbon saturation as expected based on prior work,” he says. “Once we are able to process our samples, we should get a better idea of how eelgrass in Humboldt Bay, one of the most extensive eelgrass beds on the West Coast, is affecting seawater chemistry and responding to changes that are predicted under future scenarios.”

Ocean acidification, which is directly related to an increase in human-induced carbon dioxide (CO2) in the atmosphere, presents major challenges not only for aquaculture, but also for marine ecosystems around the world, says Tyburczy. That’s where the Burke-o-lator comes in.

“With continued monitoring and analysis, the instrument will give us insight into what is occurring in the open ocean and how that translates into the bay for the health of the ecosystem and the future of bivalve hatcheries in Humboldt Bay and beyond,” he says.

Humboldt State University faculty, graduate students, and other researchers have been training on the Burke-o-Lator, enabling them to process water samples for thesis work and other experiments.

“In this way, it has the potential to complement and enhance ongoing ocean acidification research including oceanographic cruises and experiments at Humboldt State’s Telonicher Marine Lab in Trinidad,” Tyburczy says.

Tyburczy led the development of this collaborative project with colleagues at Humboldt State University, Bodega Marine Laboratory, the California Department of Fish and Wildlife, the Wiyot Tribe, and the Hog Island Oyster Company. This work is being funded by the California Ocean Protection Council and the CSU Agricultural Research Institute.