Arcata - Thanks to a Humboldt State University engineering class, a non-profit partner and two local contractors, a Del Norte County ranch is now being powered year-round by an off-grid renewable energy system. 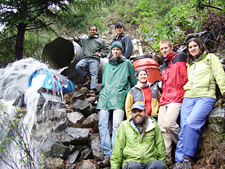 The system uses a solar photovoltaic array and a micro-hydro generator to provide electricity and eliminate the carbon dioxide and other emissions of a gasoline generator.

HSU students from the Renewable Energy Student Union (RESU) and an Environmental Resources Engineering class collaborated on the Rock Creek Ranch project with the non-profit Smith River Alliance, a land trust that fosters the long-term protection of the river’s watershed.

Dr. Jacobson said, “By harnessing two sources, mostly solar energy in summer and mostly hydro in winter, the hybrid system is able to provide enough energy all year. The environmental impact is minimal. The stream from which the hydroelectricity is generated is steep, and not fish-bearing. This new system fits the Smith River Alliance’s strong environmental ethic.”

The alliance’s executive director, Grant Werschkull, said, “When we took over management of Rock Creek Ranch several years ago, we’d hoped to be able to model and practice sustainable practices here. Thanks to Arne, the Environmental Engineering Department and RESU, we have done so.” 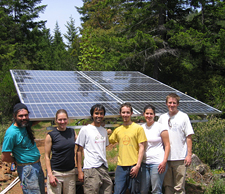 Jim Blomquist, a member of the alliance’s board, said, “It’s a big step for Rock Creek Ranch to generate its own power from renewable resources and a dream that many of us have had for some time. You [at Humboldt State] made it a reality for us.”

Also part of the project were two local renewable energy contractors, Ben Scurfield of Scurfield Solar and Don Harris of Harris Hydroelectric. Scurfield guided the transition from the design to the construction phase and served as work-site coordinator, ensuring that installation was completed according to code and common practice.

In the Fall of 2006, HSU students in Engineering 475 (Renewable Energy Power Systems) worked with the Smith River Alliance to develop a set of renewable energy designs for the ranch. In the spring, summer and fall of 2007, RESU students worked with the alliance and Scurfield Solar to install the system.

During the summer months, the bulk of the energy is generated by a 1.15 kW solar photovoltaic array. During the winter, a 600 Watt micro-hydroelectric system that is driven by a seasonal stream provides most of the electricity. The gasoline generator is used occasionally as backup.

The electrical energy from all three sources is stored in independent battery banks located at each of the two buildings. The system design includes a novel method of "transporting" renewable energy via 120 VAC lines between the two, which are separated by a distance of 700 feet.

“For the Rock Creek Ranch, the project represents an important step towards environmental sustainability for its operations in the Smith River watershed,” Dr. Jacobson said. “For the HSU undergraduate and graduate students involved, the development provided an excellent opportunity to gain hands-on experience in the design and installation of an off-grid renewable energy system.”

One of the students, Juliette Bohn, a member of RESU who is majoring in International Development Technology, underscored the value of participating in both the design and the installation. “We learned so much,” she said.