The Earth is His Classroom

Geology alum Dave Bazard’s first love is teaching. To begin with, “there was this very dynamic earth science teacher I had in middle school.” Dave Bazard (’82) was smitten with geology right then and there, scarcely a teenager.

Born in Pasadena, educated in Glendora in the San Gabriel Valley, Bazard fondly recalls childhood rock and mineral hunts in the desert, his earth science teacher serving as a formative boyhood hero.

And rock hounding with his grandparents—that was a key influence as well.

Another was a coastal vacation trip at age 12 with his older sister and a friend, including a stop at Humboldt State University. Bazard fell for the landscapes of northern California and on graduating from high school in 1976, he headed straight to Arcata.

That was the year the Tangshan earthquake obliterated Tangshan, China, killing almost 243,000 people. But Bazard arrived at HSU with forestry on his mind, not faults and quakes. He put in two years, including a couple of summers in forestry work, mainly timber production. Gradually, he realized it wasn’t holding his interest.

“One day, a friend in the Geology Department told me how great it was there, and I wandered over and talked with Don Garlick,” a much-admired professor at HSU from 1969 to 2000, and now a columnist with one of Arcata’s weekly newspapers, the North Coast Journal.

“What impressed me was that Don spent 45 minutes one-on-one, asking me question after question about whether I really wanted to be a geology major,” Bazard remembers. “It was very obvious that he was interested in student needs and his personal touch impressed me. Later I discovered that was true of the many other excellent faculty in the department.”

After earning his geology degree, Bazard gained invaluable experience in the private sector. He put in several years as a staff geologist with a San Francisco geologic engineering company. It had a major impact on his teaching style at nearby College of the Redwoods, where he joined the faculty in 1995, and as an adjunct professor at Humboldt State. In the classroom, Bazard instills the importance of critical thinking and excellent writing when working for a commercial company. A working geologist, he says, must be able to write scientific reports in clear, understandable prose, as well as speak articulately and persuasively.

These skills are highly sought after in the job market, he emphasizes, and they are equally important in the field. Accurate note taking, often under harsh conditions, is essential. “HSU got me ready for that. We went out rain or shine. Sometimes it was pouring or there were heavy winds on the beach, but HSU professors went out anyway. They gave me a can-do attitude to succeed in this kind of job. And that isn’t just gathering information accurately, it’s all the logistics—travel arrangements, map reading, navigation, collecting samples, and being on the alert for the risks that tough field conditions can present.”

Bent on teaching, Bazard left private industry to earn a master’s in geology/geophysics from Western Washington University, and then a doctorate in the same subject from the University of Arizona. At both schools, he taught as a graduate research assistant or assistant professor. Upon completion of his doctorate, he became an associate professor in geology at the University of Mississippi, Oxford, in the northern part of the state. 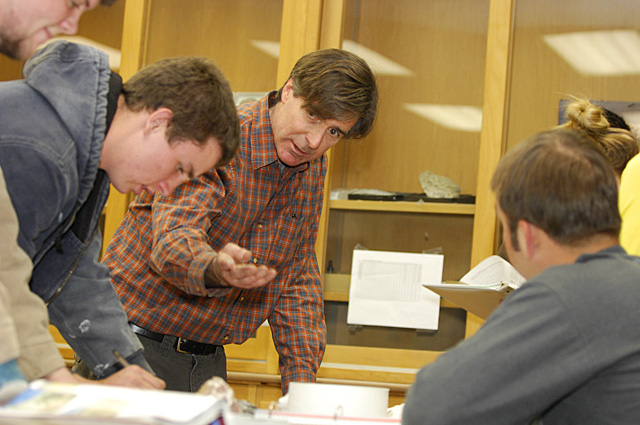 He enjoyed his four-year stay there, teaching being his first love. His literary interests also flourished. He is a fan of William Faulkner (1897-1962), the Nobel prize-winning author whose novels of rural northern Mississippi were among the greats of 20th century American literature. Bazard enjoys the subject, a liking he acquired at HSU while taking a minor (emphasis phase) in modern lit, and developed further during his teaching and research in Mississippi.

A man of the earth in every sense, Bazard made a point of visiting Faulkner’s grave in Oxford, reflecting the love of fine writing he seeks to imbue in his students at Humboldt State and at College of the Redwoods, where the Academic Senate named him Faculty of the Year in 2007.

His efforts at HSU include talks, field trips and a partnership with College of the Redwoods and Friends of the Pleistocene, a geologic society devoted to studying earth processes that occurred 10,000 years to 1.8 million years ago. Trips have taken them to western Nevada and the Sierra Nevada in California. He teaches students to evaluate scientific findings critically, based on close observation. They also take part in local investigations, like the erosion of McKinleyville’s Mad River Bluffs or remediation of Eureka’s Balloon Track (or Tract, depending on personal preference.)

What does Bazard enjoy most about teaching? “Helping my students develop a more complete view of the natural world,” he replies. “Sometimes they haven’t thought much about the earth around them. We go to the beaches at Trinidad and often they’ve been there for recreation, but they haven’t really looked at the rocks there, or the layering or what they are made of, the different rock types and the different structures within them, their geologic origins. They haven’t thought about these things and now you see this new awareness coming over them. Or we’ll tour the hills around here, Humboldt Hill, Fickle Hill, and the students will say, ‘Gosh, I never thought about why there are hills in Arcata.’ They catch on to the folding and faulting that created them. The geologic record is an eye-opener for students.”

Bazard’s teaching hinges on personal mentoring and field experience, a long-time HSU tradition. He discovered the depth of it when he took his first post right after wrapping up his bachelor’s degree in 1982. “When I went to work for this fairly large consulting company in San Francisco, one of the senior geologists found out I attended HSU, and he burst out, ‘Hey! That’s one of the best undergrad programs in the country! You get lots of hands-on experience up there and that’s what this company needs, and what we all need, in the working world.”