Cal Poly Humboldt marked the start of basketball conference play this year by formally naming the court at Lumberjack Arena after Tom Wood, one of the greatest coaches in University history. 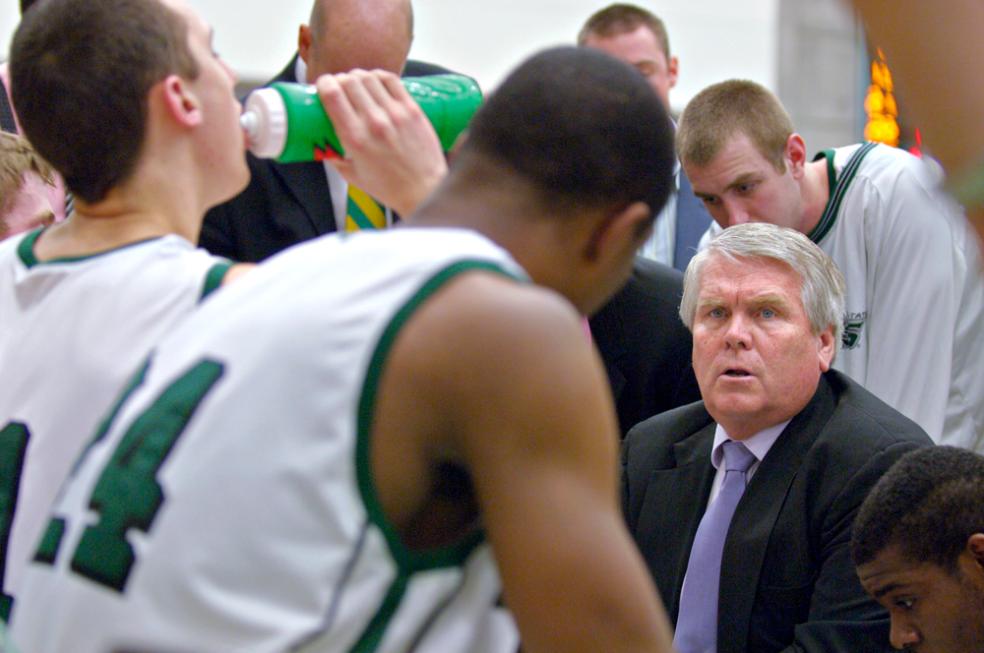 The basketball court was dedicated “Tom Wood Court” at a ceremony in Lumberjack Arena during halftime of the men’s basketball conference opener on Tuesday, Nov. 22. The court is the University’s first Athletics space named to honor an individual.

The naming is the direct result of donations by more than 60 Athletics boosters who gave more than  $400,000 for basketball scholarships. The amount exceeds the original goal of $350,000 that was needed for the naming honor. All funds will support the men's and women’s basketball programs through scholarship support. Among the lead donors are Joyce West; the estate of Oliver “Al” Pedro; Jim and Sharon Redd; Jack and Michele Rieke;  and Virginia Bass and the Bass family.

"Tom set the standard for men's basketball at Humboldt," says Cooper Jones, Executive Director for Intercollegiate Athletics & Campus Recreation. "His ability to create highly successful teams during his time as a coach speaks to his coaching acumen. He was just as successful in creating a sense of community among players and coaches, as well as among his team and Lumberjack fans. We believe this recognition is long overdue, and we couldn't be happier to recognize Tom and his family for their invaluable contributions to Cal Poly Humboldt."

Wood, who passed away in 2016, built Lumberjack basketball into a perennial powerhouse in NCAA Division II over nearly three decades leading the program.

Starting in 1981, he guided the Lumberjacks to 11 NCAA postseason appearances over 29 seasons. The 2003-04 season was a record-setting year for the program. Under Wood's direction the program achieved its first ever NCAA Division II West Region title and a NCAA DII Elite Eight appearance. The Jacks finished with a program-record 28 wins.

Donations are still being accepted. You can participate in honoring Coach Tom Wood by making a contribution through the Cal Poly Humboldt Foundation to support the men's and women's basketball programs. For more information, including about multi-year pledges or estate gifts to support the effort, contact Stacie Lyans at the Cal Poly Humboldt Foundation at (707) 826-5200 or stacie.lyans@humboldt.edu.