The trees in Northern California’s Klamath Mountains are not keeping up with climate change. Instead, many tree species are in decline, losing the race due to climate warming and decades of fire suppression. 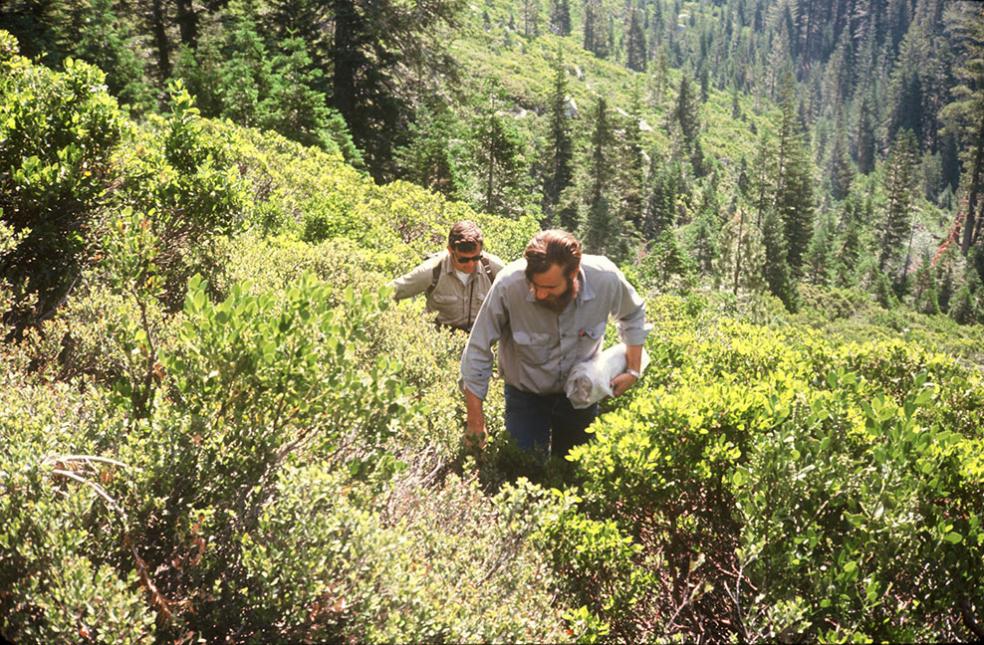 A new study by researchers at Cal Poly Humboldt, the University of Wyoming, and the U.S. Forest Service and published in Ecological Monographs found that trees in an extraordinarily diverse mountain wilderness in Northern California have been inching their way to higher elevations over the last half-century, but not fast enough to keep up with climate warming.

The Klamath Mountains are a biodiversity hotspot, home to the richest assemblage of conifer species in the world, but climate change and fire suppression threaten the future of this region.

Using data first collected by two Humboldt professors John Sawyer (Botany) and Dale Thornburgh (Forestry)  in 1969, contemporary researchers retraced their footsteps by resampling the same plots nearly 50 years later. They found that most tree species are barely starting to shift to higher ground, likely in response to climate warming. But that migration was far slower than expected given the degree of warming over the last half-century. Most tree populations are declining, and the persistence of rare species is in question.

Lead researcher, Humboldt Biology Professor Erik Jules, says the climate has warmed significantly since the 1969 study. The summer temperatures of today’s forest, at any given elevation, are similar to what would have been found 1,000 feet lower during that initial research.

“Sawyer and Thornburgh’s work from 1969 provided a treasure trove of data for understanding how forests have changed during a time of rapid warming and drying,” says Jules.

After Sawyer passed away in 2012, his wife Jane Cole, discovered a hand-drawn map of plot locations and a binder of data. Humboldt researchers then set out on a hunt to retrace Sawyer and Thornburgh’s footsteps through the rugged Klamath Mountains.

“One of the most thrilling parts of this project was when we tracked down two field assistants and former Humboldt students who worked with John and Dale, and they mailed us Kodak slides from their time in the mountains in 1969,” says Melissa DeSiervo, a former Biology graduate student at Cal Poly Humboldt and now a postdoctoral research associate at the University of Wyoming. “From the photos, we could see we were pitching our tents in exactly the same places the researchers camped nearly 50 years ago! Our ability to detect changes in the forests of the Klamath Mountains has been greatly enhanced by the careful work of this previous generation of ecologists.”

While tree species in other parts of the world have moved upslope much faster, the ponderosa and sugar pines and other conifers in the Klamath Mountains have only moved an average of 37 feet upward in the following years—a small fraction of the 1,000 feet they would need to be living at the same temperature as they did in 1969.

So why are trees in Northern California moving more slowly? Researchers believe that the suppression of wildfire is at least partly responsible.

Fire used to be a natural and frequent component of the forest environment, even in the cooler, high elevations of the region. Most tree species in the area are tolerant of low and even moderate severity fires, and some are dependent on fire for successful establishment, taking advantage of the forest canopy gaps created and maintained by fire.

“Fire naturally promotes drought- and fire-tolerant species. But fire suppression over the last century paved the way for the growth and expansion of white fir, a species less tolerant of fire and drought,” says Matthew Reilly, a former researcher at Humboldt and now a research forester with the US Forest Service.

In fact, white fir is crowding out other tree species, in particular the large, old fire- and drought-resistant pines that are declining in abundance.

Meanwhile, high-severity fires, such as the Whites Fire of 2014 that burned a small part of the study area, are becoming more frequent at high elevations that harbor much of the region’s biodiversity.

“The changes that have occurred since 1969 have resulted in a less resilient forest that may not be able to adapt to continued climate change, and one that could be severely damaged from an intense wildfire” says Jules.