The results are in from a four-year, $5.88-million biomass study led by researchers at Humboldt State University.

A biochar production site from the Waste to Wisdom study.

The collaborative project aimed to develop marketable products from the waste materials produced by logging and other forest management activities, focusing primarily on biomass energy products. Biochar was actually the only non-energy product they experimented with. 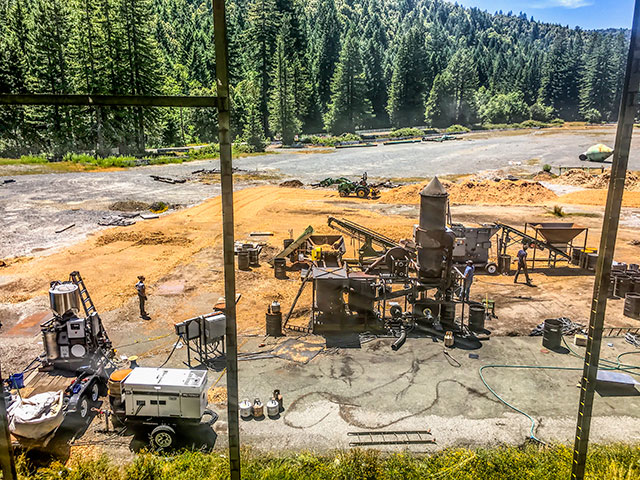 The project was also led by former Humboldt State Forestry Professor Han-Sup Han and Ted Bilek, an economist with the U.S. Forest Service, with funding from the U.S. Department of Energy and a number of research partners.

“We wanted to reduce the amount of material that was left in the forest as logging slash,” Jacobson says. Forest residues—the branches, bark, treetops, and other waste products from timber production— are commonly piled at logging sites. They increase the risk of wildfire, attract pests, and otherwise do nothing to lessen the environmental impact of logging.

“But pulling material out of the forest is messy and expensive and delivers a low energy product,” Jacobson says. “To increase the feasibility of using this material, we had to find ways to reduce the cost of collection.”

Han’s team led an effort to improve the management of forest residues—essentially sorting materials and introducing other efficiencies to avoid slashpiles.

• Briquettes, made by pressing the materials into dense, burnable blocks
• Torrefaction, which essentially roasts chipped material, creating a solid biomass fuel with higher energy density than raw wood chips
• And biochar, a soil amendment that improves water retention and is used in forest and agricultural settings to improve carbon sequestration, among other things.

“Torrefaction has promise,” Jacobson says, “but in today’s energy markets, it’s hard to imagine it competing without a supporting policy mechanism.”

On a small scale, briquettes might be an effective way to turn forest residues into a useful product. In remote logging regions like Orleans and Happy Camp, which are especially at-risk for wildfires, local commercial production of briquettes would reduce forest residues and give companies a product to sell to consumers.

But biochar seemed the most promising.

“Biochar was the most interesting we identified from a market perspective,” Jacobson says. “This is the one non-energy product covered in our project, and it’s a much more market-ready product than torrefied biomass and briquettes.”

Overall, Jacobson says Waste to Wisdom produced main three takeaways:
• Sorting—the portion of the project led by Dr. Han—has positive benefits and is the easiest part of the process to scale up for large companies.
• In the near term, it’s not clear that bio-energy products are the most important pathway for forest residues.
• Management of forest residues through a mix of processes and products, including ones not included in the Waste to Wisdom project, offer the best path forward.

Forest management operations seeking to produce biochar may still face challenges. Waste to Wisdom produced products on a small, experimental scale, and scaling up production could be tricky. Also, creating a quality product drives up the price of biochar, and producers can be undercut by producers of lower-quality material.

But Jacobson says there’s already quite a bit of interest in the results from Waste to Wisdom, including from Northern California timber companies. And the state of California is interested in the product pathways from the perspective of forest and fire management.

See the full results at wastetowisdom.com