Humboldt State University is expected to receive $1 million from the Howard Hughes Medical Institute to continue the University’s support of underrepresented students in science, technology, engineering, or mathematics (STEM) majors. 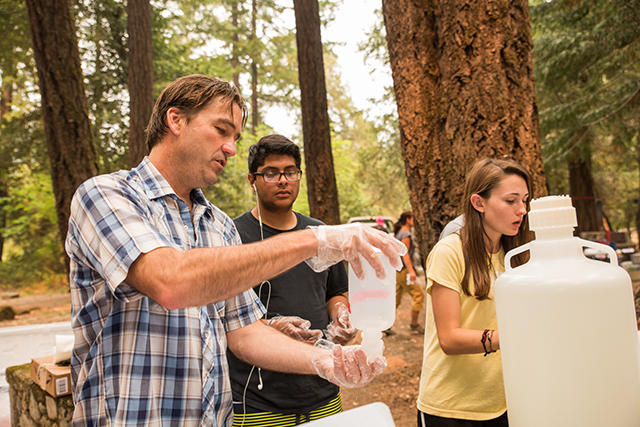 HSU was one of 24 schools nationwide and one of two California State University campuses awarded the grant by the science nonprofit philanthropy based in Maryland. The award, to be distributed in five installments of $200,000, will fund HSU’s current and future place-based learning communities, which take a holistic approach to teaching freshmen STEM majors, especially those from historically underrepresented backgrounds.

One learning community is called the Klamath Connection. Launched in 2015, the program helps students understand relationships between science and traditional ecological knowledge, the environment, and communities through the lens of California’s second largest river, the Klamath.

“The HHMI funding will allow us to grow this model so that all entering STEM freshmen will have the opportunity to participate in a place-based learning community,” says Biology Professor Amy Sprowles who, with Wildlife Professor Matt Johnson, founded Klamath Connection. “It will also fund additional experiences to help train faculty on the development of curriculum inclusive of diverse cultures and identities.”

Klamath Connection is part of HSU’s ongoing efforts to increase student success and retention rates, and improve graduation rates. As a Hispanic Serving Institution (HSI), the University was awarded a $4 million HSI STEM federal grant, which will also help fund current and future place-based learning communities among other initiatives.

The HHMI award is part of its Inclusive Excellence initiative, a program designed to help colleges and universities encourage participation and cultivate students in the natural sciences. The program focuses on students from diverse backgrounds and pathways. These “new majority” students include those from historically underrepresented backgrounds, the first in their families to go to college, and working adults with families.

“We’re thinking differently about how HHMI can help move science education forward,” said HHMI President Erin O’Shea. “The challenges this program addresses are important for all of us who care deeply about developing a more inclusive and diverse scientific community.”

The 24 institutions are a diverse group of four-year colleges and universities from across the country, but they share a common goal: increasing institutional “capacity” for inclusion. That could mean changing curriculum, institutional policies, or the attitudes and skills of faculty.

The grantee institutions have proposed creative and unconventional ideas—such as place-based learning communities—for making STEM inclusive for students from all backgrounds. Other schools proposed the development of a culturally aware curriculum and faculty training, using technology to help students manage family and cultural obligations, empowering students to serve as role models in the classroom, and creating programs to engage large numbers of undergraduates in course-based research experiences.

Finding a way to include students from all backgrounds in STEM is critical for building future generations of American scientists, said David Asai, senior director for science education at HHMI. “Science excellence depends on having a community of scientists that is rich in diversity of people and perspectives.”

For decades, educational grants ⎯ including some awarded by HHMI ⎯ have focused on interventions aimed at the students, such as summer research apprenticeships, tutoring, advising, and summer bridge programs designed to ease the transition from high school to college. While these interventions can help the students involved, they don’t generally address long-term issues that, if changed, could have a more sustained impact, Asai said. “Our goal is to catalyze changes that last well beyond the lifetime of these five-year grants.”

To learn what schools identify as challenges and to discover what ideas the schools have about overcoming barriers to inclusion, HHMI opened the initiative to a wider range of schools than had been eligible to apply in previous science education competitions. “It’s important to acknowledge that good ideas might emerge anywhere,” Asai said.

“The real work begins now,” said Asai, as each school begins to put their plans into action. He hopes to build a community of grantees who will participate in a grand experiment in institutional capacity building.