Arson Ruled Out in HSU Fire

Arcata – City fire and campus authorities have ruled out arson in connection with the small blaze that broke out in Humboldt State University’s Old Music Building January 29. 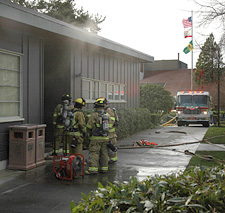 Conjecture that a cigarette butt might have smoldered for some time and ignited the flames is plausible, but unconfirmed, Chief Dewey said.

Interviews and a physical examination of the scene conducted by Arcata Fire personnel and a University Police Department investigative team determined that the fire started in a metal trash bin inside the custodial closet, Room 104.

Electronic door lock records and witness statements indicated that no one had entered the locked closet after the custodian finished his workday at 11:30 a.m., almost two hours before the fire was reported, Chief Dewey said.

When the odor of smoke became sufficiently pronounced, occupants called University Police and pulled the fire alarm at about 1:25 p.m.

Professor Eugene Novotney, Interim Chair of the Department of Music, underscored that faculty manually evacuated the building when the fire occurred. He said there was no significant damage to musical instruments, apart from smoke residue that will have to be cleaned. Music documents suffered water damage, but he expressed confidence that the bulk of them could be restored. He has been advised that about 70% of the building will be usable when classes resume. The target reopening date is February 11. However, three key faculty offices — including his own — and the men’s and women’s restrooms probably will be out of service for at least two months.

The Old Music Building was erected as a temporary facility in January 1957, and California fire codes do not require smoke detectors or sprinkler systems in that type of building, Chief Dewey said. The structure is wired with two fire alarm pull-stations and an electric and mechanical alarm system that is engineered to send an instantaneous signal to the University Police Department and trigger an audible horn within 10 to 30 seconds.

A detailed analysis of police and fire communications showed that the fire was first reported to authorities via a phone call to University Police at 1:25 p.m. on Tuesday. About 25 seconds later, the alarm signal arrived at UPD. University Police, Arcata Police and Arcata Fire personnel were then notified.

The first police officers arrived at the scene about three minutes after the call was received, and immediately began radioing information directly to Arcata Fire engine operators as they responded with red lights and sirens from three different fire stations. A unified command post was established on the University Quad, with key leaders from Arcata Fire, University Police and HSU Plant Operations working together.

The blaze was reported to be controlled within about 30 minutes of the fire department’s arrival. Damage was contained primarily to the custodian’s closet and the area immediately around it, although smoke spread throughout the building.

“The music faculty did exactly the right things,” Chief Dewey said. “When they realized that there was a fire in the building, they immediately called UPD, they pulled the fire alarm and they ordered everyone out.”

Prompted by reports that the building’s alarm horns did not sound immediately, HSU Plant Operations conducted a post-incident test of the system. The test indicated that the alarm signal arrived immediately at UPD and the horns sounded about 12 seconds after the fire alarm was pulled. That is typical of other campus fire alarm systems.

In view of the discrepancy between the test results and reports that the audible horns took too long to sound, Tim Moxon, HSU Senior Director of Facilities Management, and Plant Operations staff are probing further in an attempt to duplicate the discrepancy and ascertain the alarm system’s true functionality.

A private fire investigator inspected the scene Friday and met with fire and police officials. Cost estimates of the damage range from $300,000 to $400,000. The University’s insurance adjuster evaluated the scene, a private contractor is cleaning the interior of the building and efforts are in progress to restore the building’s interior as soon as possible.

University officials reported that one of the responding Arcata Fire engines became stuck in the storm-soaked lawn between Plaza Avenue and the Student Health Center.

Assistant Chief Cowan said two fire engines made it across the lawn without a problem, but the third, which is a narrow-tire vehicle with four-wheel steering, lost traction in the wet grass and mud. Another vehicle was able to get past its mired counterpart.

Officials said this marked the first time fire equipment experienced difficulty crossing the lawn, either in tests or real calls for service. A reinforcing substructure undergirds the lawn to support the weight of a fire engine as it enters the core campus from Plaza Avenue. University officials have opened discussions on ways to make the direct route from Plaza Avenue more reliable in winter conditions.