A Calypso Comeback and Other End of Year Performances

A number of live musical performances will be held at Humboldt State University beginning Dec. 3. 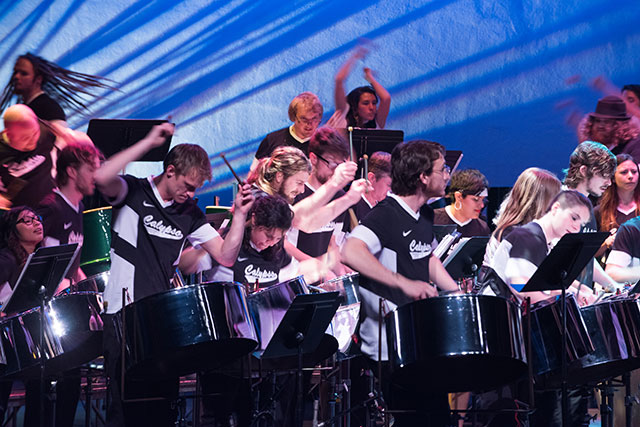 The HSU Percussion Ensemble, World Percussion Group and Calypso Band, directed by Eugene Novotney and Howard Kaufman, will be presenting their first live performances in over two years on Saturday, Dec. 4 at 8 p.m. in Fulkerson Recital Hall. Tickets are $10 General, $5 Child, Free for HSU students with ID and can be purchased online at music.humboldt.edu/upcoming.

The HSU Percussion Ensemble will be featuring the North Coast premier of an exciting new work composed by Dustin Schulze entitled Shades of Glass. This is a stunning work featuring a large percussion orchestra consisting of four marimbas, three vibraphones, chimes, glockenspiel, piano, timpani, a wide variety of drums, and a full range of percussion sound effects.

Also featured on the show will be Christopher Rouse’s engaging and bombastic composition Ogoun Badagris, which is based on Haitian ritual rhythms to the deity, Ogoun. In Haitian Vodou, Ogoun presides over fire, iron, hunting, politics, and war. The first half of the show will end with a suite of traditional Afro-Cuban music performed by the HSU World Percussion Group under the direction of Howard Kaufman, all performed on traditional folkloric instruments.

The second half of the show will feature the festive dance music of the Humboldt State Calypso Band. Last spring, the Calypso Band celebrated its 35th year of existence at HSU, all under the direction of its founder, Eugene Novotney. The Calypso Band will continue its 35th year celebration this fall by featuring several high-energy compositions from the Caribbean in their set, including the modern Panorama classic from the island of Trinidad called VISION 2020 by Len “Boogsie” Sharpe. The Calypso Band prides itself in maintaining an accurate and authentic connection to the roots of the steel band movement and the innovative musicians of Trinidad & Tobago, the island nation on which this unique percussion phenomenon was born.

The HSU Wind Ensemble, under the direction of Paul Cummings, will perform on Friday, Dec. 3 at 8 p.m. in Fulkerson Recital Hall. The ensemble performs classic concert band repertoire in addition to arrangements and transcriptions of favorite classical works including J.S. Bach’s Jesu, Joy of Man’s Desiring, and the dramatic Mars, from Gustav Holst’s “The Planets.” Also on the program are the rousing Italian march Il Bersaglieri, Paul Creston’s charming Five Little Dances, and two contrasting Serenades, one composed by Vincent Persichetti and the other by Derek Bourgeois. The concert begins with a lively brass sextet, led by Fred Tempas, and comprised of players drawn exclusively from the Wind Ensemble, including Daniel Plantenga and Gary Ross on trumpet, Dillon Doss on horn, Greg Quast on trombone, Evan Jackson on euphonium, and Fred Tempas on tuba. They play Cordoba from “Songs of Spain” by Isaac Albeniz and The Russian Sailor’s Dance from “The Red Poppy” by Reinhold Gliere.

The HSU Jazz Combos will perform Sunday, Dec. 5 at 8 p.m. in Fulkerson Recital Hall. The first combo includes Makani Bright on vibes, Niko Mussmann on guitar, Keith Staats on bass, and Seth Mattingly on drums. They will perform Herbie Hancock’s “Maiden Voyage,” Bobby Hebb’s 1960s soul hit “Sunny,” and “Gemini Vibe” by Danny Janklow. The second combo is made up of Jeff Ruiz on trumpet, Charlie Teague on guitar, Keith Staats on bass, and Carlos Dailey on drums. They will play the jazz standard “All Of Me,” John Coltrane’s “Mr. PC,” Thelonious Monk’s “Well, You Needn’t,” and an original by the group’s trumpet player, Jeff Ruiz, entitled “Hwaaa Waah.”

The HSU Madrigal Singers and Mad River Transit Singers will perform “Open Your Eyes, You Can Fly,” an eclectic program of choral music for treble voices ranging from the Renaissance through contemporary jazz, on Sunday, Dec. 5th at 2 p.m. in Fulkerson Recital Hall.

The first half of the program features HSU’s Madrigal Singers, who will perform music spanning several centuries, including Thomas Morley’s Renaissance madrigal Fire, Fire and Stephen Sondheim’s moving No One is Alone from the musical Into the Woods. Two contrasting pieces about love will be performed: Sie liebten sich beide by the renowned nineteenth century pianist and composer Clara Schumann, and Kala, Kalla from Eric Whitacre’s beloved Five Hebrew Love Songs, which will feature faculty violinist Cindy Moyer.

The Madrigal Singers and Mad River Transit Singers will join together for a rousing rendition of the Appalachian tune Will the Circle be Unbroken. In the second half of the program, HSU’s jazz choir Mad River Transit Singers will perform Burton Lane’s standard Old Devil Moon; Rosana Eckert’s “spacey samba” version of Chick Corea’s Open Your Eyes, You Can Fly; influential jazz pianist and composer Horace Silver’s Peace arranged poignantly by Michele Weir; and the song that catapulted Ella Fitzgerald to fame, a swinging rendition of the nursery rhyme A-Tisket, A-Tasket.

PLEASE NOTE: In order to best protect the campus community, beginning Dec. 1, proof of vaccination or a negative COVID-19 test result within three days prior will be required for any visitor attending an event on campus who is not staff, faculty, or a student. Additionally, facemasks will be required for admission. Because seating is limited, purchasing tickets in advance is strongly recommended.