The annual convention of the National Society for Black Engineers provided six students a chance to meet their peers in the STEM field and a transition between their academic and professional careers. 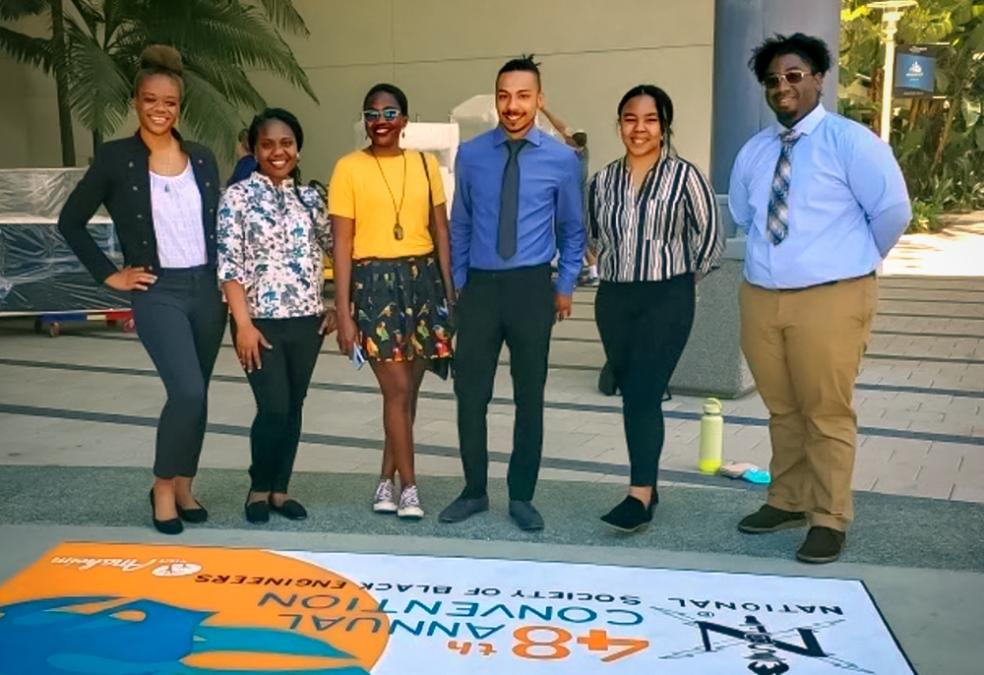 Six students from Cal Poly Humboldt attended the 48th annual convention of the National Society for Black Engineers (NSBE) in Anaheim at the end of March. The trip was sponsored by the University’s Umoja Center for Pan African Student Excellence with the goal of introducing students of color to their peers in the STEM field and providing a transition between their academic and professional careers.

“It opened an umbrella to the amount of people willing to extend hands to welcome you,” said Jason Patrick Reid, an Environmental Resources Engineering major who landed a job at the event. “The NSBE conference was the first conference where I saw black engineers in a professional context. And self-esteem wise, it was an amazing boost. I would hope more students would attend.”

The NSBE is a student-governed organization founded in 1975. Its mission is to “increase the number of culturally responsible black engineers who excel academically, succeed professionally, and positively impact the community.” Its annual convention includes a career fair with thousands of potential employers for graduating students in the STEM fields.

Reid, who graduates this spring, participated in the virtual and in-person options of the career fair to increase his odds of interviewing with the City of Los Angeles.

“I made my presence known to the Department of Water and Power and the Los Angeles Department of Transportation on the virtual side of the career fair,” Reid says, adding that he and fellow student Demi Ogunwo researched the location of the booths they wanted to visit to use their time most effectively. He reconnected with the potential employers he’d networked with online and gave his resume to a representative from the Los Angeles Department of Water and Power. Immediately after the convention he received a call from the principal environmental engineer of the City of Los Angeles, which led to a job interview, then a job offer.

“I learned about the construction industry after seeing a panel that made me realize the whole range of jobs I could be applying to,” she said. “I’ve started applying to two companies in that field. I’m thankful to Cal Poly Humboldt for the opportunity.”

Two other students also had job interviews generated by the conference. Smith said attending the conference provided networking opportunities for Black students and a “warm handoff” to potential employers that’s often essential for the next step after earning a degree, says Doug Smith (‘15, International Studies), coordinator of the Umoja Center for Pan African Student Excellence, one of four cultural centers for academic excellence at Cal Poly Humboldt.

“It’s great to invest in students in these ways,” he said. “We have students who come from all parts of California and across the country and opportunities like this provide a pathway forward for the degrees we’re working hard for.”