Jones has more than two decades of experience in athletics and higher education, serving in administrative and revenue generating roles. His expertise includes strategy, planning, implementation, and budgeting for athletics programs; increasing philanthropy through sponsorship and major gift programs; and marketing and promotions. Jones has experience working with innovative executive teams and has proven his leadership skills in many programs in higher education and other organizations. 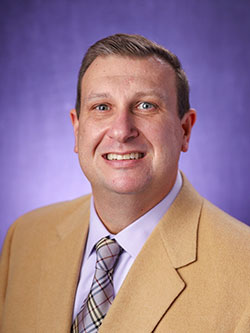 Throughout the course of his career, he has worked at institutions that place a high value on competitive success. At each institution, the men’s basketball team has advanced to at least one NCAA Tournament appearance. On four separate occasions those men’s teams advanced to the NCAA’s Sweet Sixteen round, with the 2002 Maryland men’s basketball team winning the NCAA National Championship.

Women’s basketball programs have been just as successful at each school he has served. Highlighting those successes are the 2006 NCAA National Championship (Maryland) and the 2008 NCAA National runner-up (Louisville). WNBA first-round draft picks, conference and national Players of the Year, and NCAA #1 and #2 seeds were an important part of the success achieved at each of the schools he served.

The baseball programs at each school have also enjoyed tremendous success. Regular season and conference titles, as well as NCAA Regional and Super Regional appearances are a regular occurrence at each school in his background. Highlighting this success was Louisville’s first-ever appearance in the College World Series in 2007, along with NCAA National Coach of the Year award and first-round selections as a part of the MLB Draft.

During his career, he has been intentional in building diverse and inclusive teams, has been a part of three University Advancement capital campaigns in excess of $1 billion dollars and annual fund drives in excess of $935 million, with direct responsibility for $505.5 million in new gifts and commitments.

“As a former student-athlete I understand the importance of a strong athletic department that supports our young student-athletes in the classroom and on the field,” says Jones. “One of my priorities will be to provide all the assets—tangible and intangible—that every student-athlete deserves and will need to be successful at Humboldt State University. And more importantly, for them to be successful once they leave campus and find their place in the world.”

“I am committed to developing a strong infrastructure that supports student-athletes, coaches, and staff to enable them to elevate Humboldt State to an unprecedented new level,” says Jones. “We have some exciting plans for the future of Lumberjack Athletics, and I will wake up every morning energized and enthusiastic about executing on those plans while aligning our department goals with the University’s objectives to create an athletic program that attracts national distinction. I am equally committed to evolving the club and recreational experience for our students and the university.”

“This is an incredible opportunity and I have worked for more than 20 years to prepare for this day,” he says. “I appreciate the encouragement I have received along the way from family, friends, and colleagues. I look forward to working hard each day to earn the trust and respect of the Lumberjack community, and building the type of intercollegiate athletics and recreation sports program our student athletes, staff, coaches, and entire University will be proud of.”

“I would be remiss if I didn’t thank James Hurley, President of Tarleton State University, and Gabriel Cagwin, Vice President of Tarleton State University, for the tremendous opportunity they extended to be part of their team. I truly enjoyed being a Texan, and the leadership and guidance from both Dr. Hurley and Dr. Cagwin has been vital to my career growth. I am indebted to both men for their unwavering friendship and support.”

Prior to those roles, he was a fundraiser and major gift officer at three different institutions, primarily focused on raising funds for athletics programs.

Jones, a native of Conyers, Georgia, earned a Bachelor’s degree in Journalism and Public Relations with a Minor in History and Health Care Communications from Ohio University. He was a three-year letter winner and senior captain for the Bobcats football program and also made the Dean’s List.

Jones is married to the former Tiffany Goodman, who was born and raised in the East Bay region of San Francisco. She was a member of Georgia Tech’s first-ever ACC champion softball team in addition to being an Academic All-Conference selection. The couple are proud parents to a son, Jack, and twin daughters, Annie and Janie.

“We are excited to welcome Cooper and his family to the Humboldt State University community, says President Tom Jackson, Jr. “He brings extensive experience and a strong record of success, along with great enthusiasm. It’s a great time to be a Lumberjack, and getting Cooper on this team is just one more reason.”

Dr. Debbie Yow, former Director of Athletics for Saint Louis University, North Carolina State University, and the University of Maryland, says, “Cooper has an unparalleled work ethic. He understands what intercollegiate athletics adds to an institution of higher education and will be in lockstep with the senior leadership team of the University. His experience in athletics will bring a fresh perspective to problem solving, a trait every successful athletics director possesses. Congratulations on a terrific hire.”

Michael Lipitz, Director of Athletics at University of Illinois Chicao, says, “Cooper knows firsthand the transformative impact of the student-athlete experience. He will be dedicated to his student-athletes and passionate about elevating Humboldt State to new heights. The Lumberjacks got better today!”

About HSU Athletics
Every year HSU Athletics fields 11 competitive NCAA Division II men’s and women’s sports teams, most of which compete in the California Collegiate Athletic Association as full members and the Great Northwest Athletic Conference (GNAC) as associate members. In addition, there are robust recreational programs that include 16 competitive and three recreational sport club teams, the University’s Student Recreation Center, outdoor and aquatic adventure programming, along with the Humboldt Bay Aquatic Center.

This story was originally published June 8.