May 22, 2012
Campus News
Applications and admits continue to rise despite efforts to control enrollment

_The following was provided by the CSU Chancellor's Office._ The California State University today released preliminary systemwide data for the upcoming fall term indicating all-time highs in applications, and a year-over-year increase in the number of students admitted.

Throughout 2010-2011, the CSU welcomed 95,000 new undergraduates while denying access to almost 22,000 qualified applicants because of reductions in state support totaling nearly $1 billion.

“The CSU is caught between a huge demand to attend our universities and a state that simply is not providing adequate funding for these students,” said Eric Forbes, CSU assistant vice chancellor, student academic support. “We are facing a tipping point in terms of the promise of access that is at the heart of the CSU mission.”

As of May, CSU systemwide applications and admissions for fall 2012—with fall 2011 figures in parentheses—are as follows: 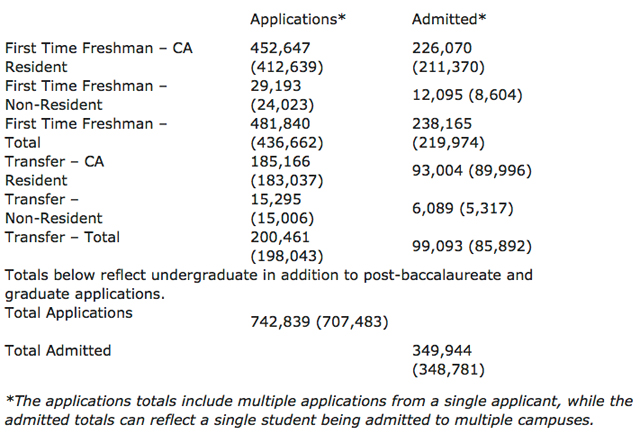 CSU campuses continue to review and admit additional students as the current academic year comes to a close and transcripts are received.

The CSU is discussing numerous contingencies surrounding a $250 million potential trigger cut included in the governor’s May budget proposal for 2012-2013 if his tax measure is not approved by voters this fall. That trigger would reduce CSU’s state funding to historically low levels, last seen in the 1990s, despite serving many more students.

Starting in the spring 2013 term, CSU will reduce enrollment to match available funding. Admission of new students for that term will be limited primarily to those who have received an associate degree for transfer from a California Community College. Other students may apply and be admitted under specific exceptions (e.g. veterans, some nursing program applicants and some teacher credentialing applicants).

For the fall 2013 term, the CSU will waitlist all students applying for admission pending the approval or rejection of the tax measure—with a rejection and the subsequent $250 million budget cut leading to the possibility of further reductions in enrollment. Admissions notifications for fall 2013 will be sent only after the fate of the tax measure and subsequent impacts on enrollment are known.