Will Goldenberg tossed a handful of peanuts onto the concrete, hoping to lure the Steller’s Jay from its nest outside Founders Hall. After a few minutes, the blue and black bird popped out of a bush and hopped over to the pile of nuts scattered on the ground.

“Jays go crazy for peanuts,” explained Goldenberg, a graduate student in HSU’s wildlife program researching the birds. “Some will even weigh the nuts with their beak to see which is the heaviest.” 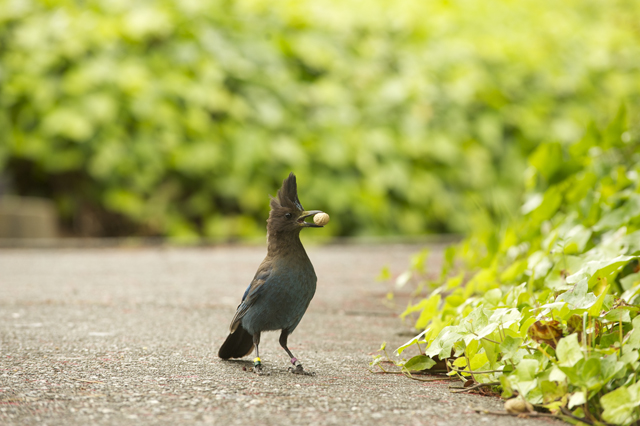 Goldenberg is part of a group of undergraduate and graduate students researching the behavior of Steller’s Jays on and around campus under Wildlife Professor Jeffrey Black. Black has been banding, tracking and studying the smart but notoriously vocal birds since 1998.

“Jays are wonderful focal animals because they are conspicuous and travel in pairs and family groups, allowing students to practice monitoring skills,” Black explains on a website dedicated to his research.

Native to western North America, Steller’s Jays members of the Corvid family—the same group that includes crows, ravens and magpies—and are considered some of the most intelligent birds in the world. Although Humboldt State’s jay population lives on campus year-round, the birds are most active—and visible—during breeding season from May to August.

The process of studying jays begins with banding. Once a bird is spotted, it’s fitted with four colored leg bands—two on each leg. The order of the bands is recorded from right to left, bottom to top, Goldenberg explains. This unique I.D. card allows researchers to chronicle a bird’s behavior throughout its life. During an outing, researchers will take notes on the bird’s location, behavior and interaction with other jays, then record that information in a comprehensive database maintained by Black and his students.

Pia Gabriel (’12, Wildlife) estimates that she’s studied about four generations of birds since starting her research with Black six years ago. “Getting to know birds as individuals, you gain a different perspective on them,” she says. Like most HSU students, Gabriel has focused on observing their social behavior. Her specialty? Personality types.

“Just like humans, there are jays that are shy and need a cue from another bird to do something and jays that are more explorative and risk takers,” Gabriel explains. She is examining how contradictory personality traits—specifically aggressiveness and timidity—affect a bird’s lifespan and reproductive success. 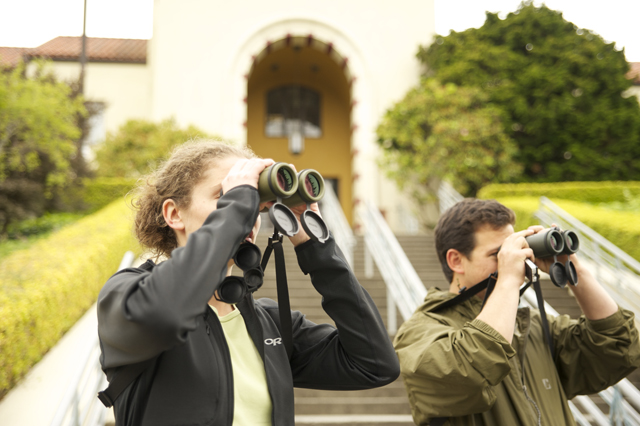 When it comes to predators, for example, timid birds are better off because they are less likely to put themselves in danger, Gabriel explains. But bold jays often attack predators collectively in a behavior known as mobbing. So, both personality types have their drawbacks and benefits depending on the situation, she says. 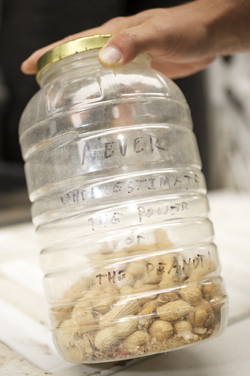 When it comes to mating, Gabriel has found that being shy or bold isn’t necessarily an indicator of reproductive success. What does matter, she found, is that both birds have similar personalities. In other words, pairs in which both partners are shy or both are bold are generally more successful at raising offspring than couples with mismatched personalities.

Graduate student Katlin Overeem (’12, Wildlife) is also examining the mating behavior of jays, but with a focus on fidelity. Although Steller’s Jays were once believed to be monogamous, Overeem disproved that theory when she used DNA analysis to demonstrate that some jays are in fact unfaithful. Now, she is focusing her research on how personality types influence fidelity. In other words, she explains: “Are certain personality types more likely to be unfaithful than others?”

In addition to working with the community, Gabriel thinks that one of the draws of studying Steller’s Jays is that they make such fascinating research subjects: “You answer one question and it leads to five others. I wouldn’t be bored studying this for the rest of my life.”