How Do Ticks Survive Between Meals? Vitamins

One Pacific Northwest tick is quite the survivor. 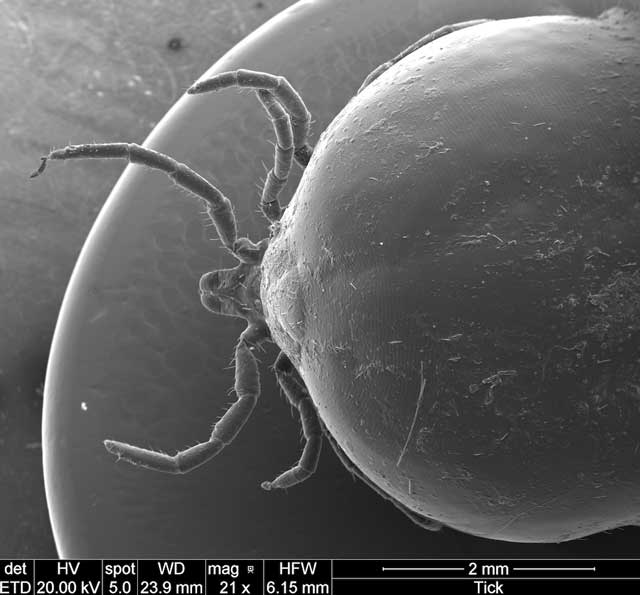 When attached to its host, the western blacklegged tick feeds only three times during its life cycle. Juveniles and adults can even live up to one year between meals.

How this tick stays alive so long on so few nutrients and essential vitamins is the focus of recent research by Humboldt State University biology Professor and resident tick expert, Jianmin Zhong.

He and his team of Humboldt State students recently found that a species of Rickettsia bacteria carried by western blacklegged ticks has one of five enzymes needed to make folate, which is essential for all living systems to synthesize DNA and RNA. Their findings were published recently in Ticks and Tick-Bourne Diseases.

“The long-term goal is to control tick populations so that we can decrease incidents of tick- borne diseases,” says Zhong, who has been researching ticks, tick-borne pathogens, and symbionts since 2001.

Zhong worked closely with students James Bodnar, Sergio Fitch, and Allison Rosati to explore the nutritional interactions between a tick and the bacteria transmitted at each stage of the tick’s life cycle.

A tick can neither synthesize B9 nor obtain it from its host’s blood, which lacks the vitamin. Instead, the rod-shaped bacteria’s own enzymes produces vitamin B9 from scratch, all without the help of the tick’s enzymes. This process—known as de novo biosynthesis—supports B9 production to keep the tick alive longer.

Their research explains the western blacklegged tick’s ability not only to survive but also grow new tissue before molting to the next stage of its life. And with so little information on how endosymbiotic bacteria (bacteria that lives inside the cells of another living thing) function, Zhong’s results provide a better understanding of tick biology and open more possibilities to controlling the population of ticks, which are now the top cause of vector-borne diseases in the country.

One of those illnesses is Lyme disease. According to the Centers for Disease Control, there are 300,000 cases of Lyme disease in the United States each year. Diseases from mosquito, tick, and flea bites have more than tripled from 2004 to 2016. Among the reasons are warmer weather, tropical deforestation, more people traveling, and an increase in deer and rodents – the hosts of choice for ticks.

Tackling our tick woes seems daunting. One adult female can lay thousands of eggs and pesticides are generally ineffective, not to mention harmful to the environment, says Zhong.

But he hopes his research can help stop ticks from the inside out. “I’m hoping to see the decrease of the incidence of tick-borne diseases in my lifetime using bioengineered ticks that can’t synthesize vitamins to starve it or to reduce the number of eggs female ticks produce.”

Tick Tips
As summer and tick season kick into gear, here are some simple steps you can take to avoid tick bites:
• Before heading outside: Know where to expect ticks; treat clothing and gear with products containing permethrin; use EPA-registered insect repellents; and avoid wooded brushy areas.
• After being outside: Check your clothes for ticks; shower soon after being outdoors; and check your body for ticks.