Area bookstores have taken delivery of "California Indian Languages" by Humboldt State University Anthropology Professor Victor Golla. The milestone volume is the first encyclopedic reference book of all indigenous languages known to have existed in California before 1850. 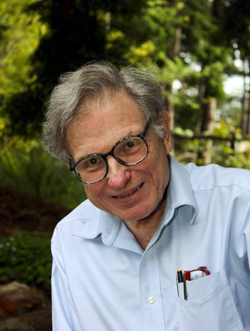 The omnibus work has drawn praise from fellow linguists and anthropologists alike.

"This book is a wonderful contribution that only Golla could have written," says Ives Goddard, senior linguist emeritus at the Smithsonian Institution. "It is a perfect confluence of author and subject matter."

The book lays out in full detail the basic facts about every indigenous language of the California region, about 80 all told.

Golla began work on the project in 2003, but the volume stems from a lifetime career in the study of indigenous languages in California and the Northwest. From the time of his graduate studies at Berkeley in the early 1960s, he has been a well-known figure in North American linguistics and anthropology. He served for more than two decades as the Executive Secretary of SSILA, the international professional society for American Indian linguistics.

Golla has taught at Humboldt State since 1988, and was earlier affiliated with the University of Alberta, Columbia University in New York, and George Washington University and the Smithsonian Institution in Washington, D.C.

The focus of "California Indian Languages" is what Golla calls the "aboriginal state of affairs"-the diversity of languages spoken in the pre-white era. Rich ethnogeographical data are supplemented by numerous maps. The history of documentation is uniquely illustrated by more than 100 photographs. The salient linguistic facts about each distinctive language or language group are summarized in tables, and surveyed on an area-wide basis in a separate chapter on "California as a Linguistic Area."

Golla's compendium cites everything known about the languages of California as they have been recorded and transcribed by linguists and anthropologists since the 1880s. Also noted are the less systematic, but still valuable materials collected by earlier explorers and missionaries, beginning with Cabrillo in the 1540s. Special sections are devoted to extensive field collections developed by C. Hart Merriam and J. P. Harrington during the first half of the 20th century.

"California Indian Languages" is a one-of-a-kind reference work for graduate students and professionals who need a detailed manual to guide their research on California's native cultures, histories and archaeology. It can also assist California tribes in their efforts to retain knowledge of their traditional languages, Golla said. In his words, "If you're teaching a language renewal class on, say, the Hoopa Reservation, you're very interested in knowing how to find all the information that exists on the Hupa language. This book tells you that."

At the same time, however, the work is accessible to general readers. "It's not overly technical or laced with jargon," Golla says. "Someone interested in the local Wiyot language, for example, will find lots of accurate information easily accessible, including where it was spoken, how it was divided up into dialects, what the grammatical structure of the language is and how Wiyot is related to other languages."

Much of the information will be new to most readers, according to Golla. "Thus, many people will be surprised to learn that the name Wiyot comes from the indigenous word for the Eel River. "The Wiyots actually call themselves, and their language, 'Sulatelak.' It's that kind of fact that people will go to my book to find out."