Three Environmental Resources Engineering Students flexed their modeling and urban planning skills to win a slew of awards at the 2017 Interdisciplinary Contest in Modeling, which took place in January. Results were announced April 7. 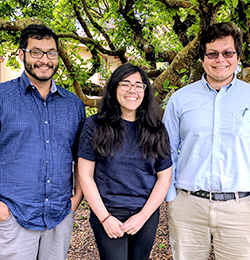 For the last 16 years, student teams from HSU’s Department of Environmental Resources Engineering and Department of Mathematics have participated in the four-day math modeling competition. This year HSU had 10 teams competing in the contest, which consists of two parts: the Mathematical Modeling Contest and the Interdisciplinary Contest in Modeling, both sponsored by the Consortium for Mathematics and its Applications (COMAP). During the online contest, teams of three students researched, modeled, and communicated a solution to either a mathematics or interdisciplinary modeling problem.

Environmental Resources Engineering students Yaad Rana, Marcela Jimenez, and Joshua Martinez received the highest ranking possible, Outstanding Winner, for their submission. The team was one of only 14 out of 8,085 competitors to achieve the ranking, and one of only two teams to win the Two Sigma Scholarship Award, which provides a stipend of $3,000 for each of the team members and a $1,000 award to the Department of Environmental Resources Engineering.

The team also received the Rachel Carson Award, which honors the American conservationist whose book “Silent Spring” initiated the global environmental movement. This award is presented to a team for excellence in using scientific theory and data in its modeling.

In the competition, teams select from series of problems to work on. Rana, Jimenez, and Martinez focused on urban planning by looking at smart growth and sustainable cities. The teams sought to understand and model the principles of modern urban planning to improve city operation. The problem challenged the students to utilize a diverse set of skills including science, mathematics, politics, government operations, data science, and analysis in their modeling. The team searched for pertinent data and grappled with how internal and external issues needed to be considered, all while competing against teams from Australia, Canada, China, Hong Kong SAR, Indonesia, Singapore, the United Kingdom, and the United States.

A selection of Rana, Jimenez, and Martinez’s solution paper will be featured in the “Journal of Undergraduate Mathematics and Its Application.”