A record 1,056 new freshmen are enrolled at Humboldt State University for the fall semester, an 8% jump from the 981 posted a year ago. The leap in new transfer students is even higher—15%. 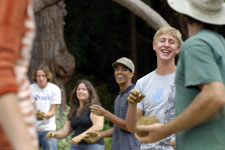 Total university enrollment today is 7,781 versus 7,435 in 2006. “That’s turned around a downward trend in enrollment for about three straight years, so that’s a nice increase,” Mike Reilly, Associate Vice President of Enrollment Management, reported to the Academic Senate Sept. 25.

Total FTES represents what the academic departments and faculty use to calculate such factors as teaching loads.

Even stronger than the 8% expansion of HSU’s freshman class is the climb in new transfer students—a 15% increase from 928 to last fall’s 805. Reilly said that, CSU system-wide, transfer growth rates were flat in many instances and a number of institutions saw declines, but HSU defied those trends.

The same thing as happened in other categories. “You may recall that we had a downturn in graduate and post-baccalaureate enrollment last fall, and that’s been turned around, too,” Reilly said. Such enrollment is up by 45 students, to 358 from 302.

“All of our [enrollment] trends have been very positive over the past year,” Reilly told senators. “We are very confident we will meet our enrollment target, I believe for the first time in nine years. That’s very good, and we should exceed it by about 2%.”

Signs of the upward trend abound. For example, the number of transfer students of color grew an extraordinary 25%.

And although overall numbers of HSU freshmen of color grew only slightly, Reilly pointed to an oddity—a major increase in the number of new freshmen who either did not disclose their ethnicity or put themselves in the category of “other.” He said 29% made no disclosure. That is more than double the CSU average and up from 13% of enrolled freshmen in 2003.

“For some reason we have an inordinate number of students [in the category of other]—maybe that’s just something about Humboldt State students and their desire not to be put into a box,” he said. “Also, interestingly, those students enroll at much higher rates than other applicants to Humboldt and they’re also retained at much higher rates.”

Reilly noted that, beginning with Fall Semester 2009, all universities nationwide will have to collect multiple ethnicity data. That is expected to drive down the “other” category considerably, but probably will drive down individual ethnic group categories as well.

The Western Undergraduate Exchange (WUE) program continues to bolster Humboldt State enrollment. The number of new out-of state freshmen and transfer students rose considerably this fall, to 355 from 249. The WUE is a consortium of 13 western states that enables students to enroll in another state for 150% of in-state fees. Owing to California’s low fees, 150% is still less in-state than in a number of counterparts. “We’ve enrolled far more WUE students than Chico,” Reilly said, and those students count as FTE. States that contribute most to the Humboldt State’s WUE population are Washington, Oregon, Alaska and Hawaii.