Parents take note: listening to heavy metal or other fringe music may not have as negative an effect on your kids as you may have thought.

HSU psychology professor Tasha R. Howe and her students recently conducted a study comparing adults who listened to heavy metal music in the 1980s to their non-metal loving counterparts.

Perhaps not that surprising: metal heads engaged in riskier behavior as teens. But the silver lining? That lifestyle did not relate to them being any less successful or functional as adults. 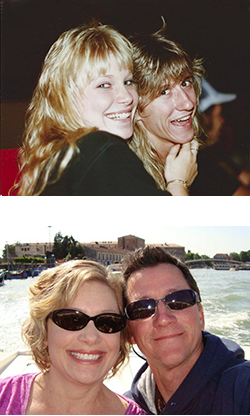 From Adolescence to Adulthood

A former heavy metal groupie herself, Howe was interested in catching up with other metal heads in middle age. Had they outgrown their adolescent feelings of cynicism and alienation? Had they made the healthy transition from adolescence to adulthood?

“In the 1980s, many parents and politicians were worried about heavy metal becoming overly popular with teenagers,” says Howe, whose husband was the lead singer of the band Metal Church. “Some saw it as synonymous with Satan worship, drug use, wild sex, despair and suicide.”

But for Howe and other groupies, metal culture provided a sense of belonging. It also helped alleviate the growing pains of adolescence. “We gravitated to these artists because we could relate to the messages in the music, especially in regard to what we saw as hypocrisy or closed-mindedness in adults,” Howe says. “Of course if the singer was cute, that was a bonus.”

Calling all Singers and Groupies

For the study, Howe and her graduate school mentor at the University of California, Riverside, social psychologist Dr. Howard Friedman, put a call out on Facebook for research volunteers. They got 377 respondents—including former musicians and groupies who had liaisons with famous musicians.

The survey included questions on personality traits, traumatic childhood experiences and attachment style, as well as other variables such as past and current drug use, income, happiness and sexual partners. It also asked them to discuss their experiences in youth and adulthood.

The results showed that those who identified most closely with heavy metal culture in the 80s were more likely to come from stressful or chaotic homes. They also reported higher rates of child abuse, sex and drug use.

But, contrary to what one may think, the heavy metal enthusiasts were just as well-adjusted as adults as their non-metal listening peers, Howe says.

“Not only were the middle aged metal enthusiasts gainfully employed and well educated, they also looked back fondly on their adolescence in the 1980s,” Howe says.

In fact, the study showed that their middle-aged counterparts were more likely to seek psychological counseling and report having a less happy adolescence. The current college students also exhibited higher rates of current negative behavior and attitudes.

The results highlighted two points, Howe says. “First, that adolescence is a time when most youth are searching for an identity. This was a theme that resonated with all of the groups assessed.”

But for the metal listeners, heavy metal culture seemed to provide an important protective function. “That social support and sense of community may have even helped them through adolescence,” she says.

“Fringe style cultures can attract troubled youth who may engage in risky behaviors, but what we found is that they also serve a protective function as a source of kinship and connection for youth seeking to solidify their identity development,” says Howe. “Future studies could examine the effects of other fringe music cultures like Hip-hop and Emo.”

Howe and her students will present their paper, “Heavy Metal Enthusiasts at Mid Life: Developmental Trajectories and Functioning Three Decades Later,” at the biennial meeting of the Society for Research in Child Development in Seattle April 18-20. Six students got hands-on experience conducting research, designing the survey, analyzing the results and designing conference posters for the study. Four will be co-authors on the paper.

Support for the study came from the Sponsored Program Foundation’s Research, Scholarship and Creative Activities Fund and the Humboldt Loyalty Fund, which backs student scholarships, academic programs and faculty research through family and alumni gifts. For more information, on the Fund, visit humboldt.edu/givingareas.