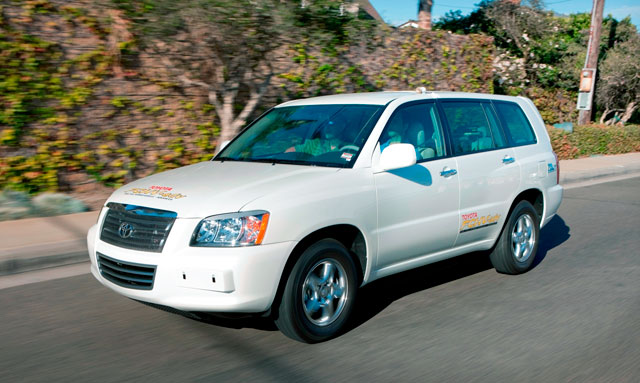 The Schatz Energy Research Center operates a hydrogen fueling station on campus that is the northernmost link in California’s emerging Hydrogen Highway, a network of such stations that eventually will allow hydrogen-powered vehicles to travel across the state as demand intensifies for alternative sources of energy.

Known officially as the Toyota Fuel Cell Hybrid Vehicle (FCHV-adv) and built on the Highlander mid-sized sport utility vehicle platform, the FCHV-adv uses the same hybrid technology perfected in the Toyota Prius, which the Schatz Center also operates. The FCHV-adv is designed to provide extended driving range when compared with previous generations. Starting with a tank only three-quarters full, Schatz director Peter Lehman and his colleagues drove 275 miles to Arcata from the Richmond Field Station of the University of California, Berkeley. The Schatz Energy Research Center is collaborating with the University of California, Berkeley, and Toyota Motor Engineering and Manufacturing, North America, to test and demonstrate the vehicle.

The FCHV-adv’s fuel cell system consists of a 100 kilowatt fuel cell, four hydrogen fuel tanks, an electric motor, a nickel-metal hydride battery and a power control unit. The latter governs the division of energy between the battery and the fuel cell stack to power the vehicle. It is the same mechanism that manages the gasoline engine and battery in the Prius.

The FCHV-adv’s only emission is water vapor. It is certified by the California Resources Board as a zero-emissions vehicle.

The FCHV-adv fleet tests consumer acceptance and the market dynamics of fuel cell vehicles with 20 vehicles currently in service in California. Toyota plans on at least doubling that number in the next year and on placing them in other states. The University of California, Irvine, and the California Fuel Cell Partnership are also part of the test program.

The loan to Humboldt State was arranged by UC Berkeley’s Transportation Sustainability Research Center. It is teamed with Schatz on a hydrogen and fuel cell curriculum development and education project for the U.S. Department of Energy. The FCHV-adv road test provides a complement to the project.

The Transportation Sustainability Research Center conducts real-world testing and analysis of fuel cell, plug-in hybrid and other clean fuel vehicles, in association with other universities and group, which now include Humboldt State.