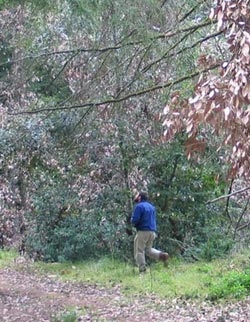 Large tribal land bases in southern Humboldt County are at risk and so are parts of Curry County, Oregon.

The onset of sudden oak death is imminent in the watersheds of the Van Duzen and Mattole River basins, "and unfortunately we expect they [tanoaks] will die very quickly as the disease spreads," warned Wildland Fire Science Professor Morgan Varner. Portions of the Kings Range, Eel, Mad, Klamath and Trinity riparian regions are also at risk.

Sudden oak death is well-known in many Bay Area suburbs, where hillside landscapes in Marin and Sonoma Counties are brown with large patches of exceptionally dry dead leaves.

A non-native disease first detected in the Bay Area in 1995, sudden oak death infects tanoak, one of the five most flammable oaks in California and the hottest burning hardwood in North America. The disease drastically reduces the moisture content of leaves and foliage. The missing moisture in dead trees poses a high risk of crown fires, the HSU scientists say. Crown flames burn with exceptional heat and speed, and inflict grave ecological damage.

Owing to their height, crown fires are also more likely than ground blazes to be whipped up by prevailing winds.

The danger is intensified by a specific characteristic of sudden oak death: deceased tanoaks experience prolonged leaf retention, up to two years or so. That means crowns bear heavy fuel loads for extended periods, primed for ignition by extreme dryness.

Eventually, prolonged dead leaf retention adds to the litter fuel on the forest floor, further compounding the threat. "The energy released is so great you can't combat [crown fires] with standard firefighting practices," Varner said. "You just have to move back, and let them die down. You could never imagine attacking this thing."

Yet another factor complicates the hazard, the deadly link between fire intensity and flame length. As flames lengthen, intensity increases exponentially. "When a tree crown is on fire, it's not just that the flame is twice as long, it's that the [heat] intensity is many times greater," Varner explained.

The death of tanoak confronts Native Americans with particular dilemmas because acorns and the food products derived from them, like flour, have been a staple of tribal diets since time immemorial. The species also has sacred religious and spiritual significance to indigenous peoples.

"The disease hasn't entered their land bases yet, but it's in southern Humboldt and it's also been found in spots in Curry County, Oregon," Varner said. "Tribal use of tanoak is of longstanding [practice] and this fire threat is a very big deal to relatively large tribes like the Karuk and the Hoopa."

As Varner and Kuljian commenced their research a year ago, they were hearing from many land and forest managers about sudden oak death's spread and how to deal with it.

Kuljian said the best interim countermeasure is pruning a dead tree's lower limbs. "That raises the height of the fuel, so that, even if you had a moderate surface fire, it might not reach the crown," he said. "Some land owners have tried whole tree removal. It can be very expensive, but it can still be a good option. They've also made the mistake of dropping the tree, hoping it would decompose on the site quickly. But in fact, it can take several years, and in the meantime you've got a huge surface fire potential there."

Varner and Kuljian say the threat is more urgent and immediate than they thought when they started their research because moisture levels in dead tree foliage were far lower than they expected. In Varner's words, "Once the tree turns brown, we know it has really low foliage moisture content and it is ready to be ignited."

Typically, living leaves are equal parts water and dry matter in a one-to-one ratio. An incipient fire has to expend large amounts of energy, literally boiling the moisture off before ignition occurs. What surprised the two was Howard's discovery in sample trees not far from the town of Redway of five percent moisture levels, which are "incredibly low," they said.

"This was right on the edge of Cal Fire Eel River Camp, some of the trees were on its property," Kuljian said. "We were measuring surface fuel as well—leaves on the ground—and they were about the same. In other words, leaves on the trees and on the ground were closely tracking one another as far as foliar moisture is concerned."

That is a rarity, too, Varner added. "We were floored by the single digit measurements, that the moisture values were so low. It's totally outside what you'd expect."

Details of Varner and Kuljian's research are available in the science journal Forest Ecology and Management at www.elsevier.com/locate/foreco. The article is titled "The Effects of Sudden Oak Death on Foliar Moisture Content and Crown Fire Potential in Tanoak" and appears in Volume 259, Issue 10, April 30, 2010, pgs. 2103-2110