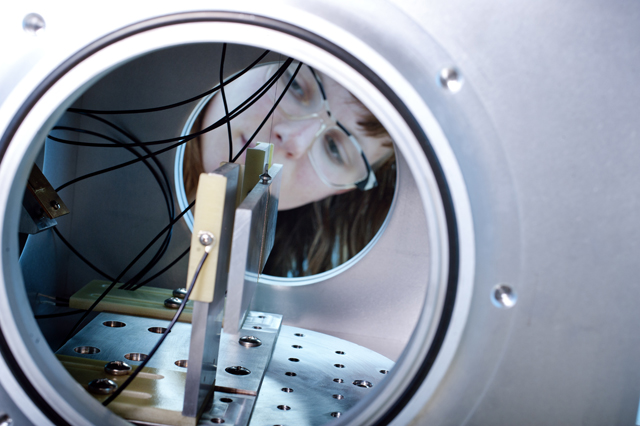 Students and faculty hope to capture crucial evidence of what lies behind the origins of the universe, its accelerating expansion, and whether Einstein’s famous idea of relativity—gravitational force—or quantum mechanics is the more accurate model of nature.

In a series of experiments this fall and through 2013, HSU undergraduates will put gravity on trial across distances half the thickness of a human hair—10-20 microns—to see if gravitational force breaks down at extremely short distances. If it does, Einstein’s celebrated theory might take second place to more recent string theory, which attempts to meld the theory of relativity and quantum mechanics into a single theoretical model of the universe. Quantum mechanics describes the structure, motion, and interaction of subatomic particles mathematically.

“In a nutshell, the purpose of this research project is to conduct a world-leading test of gravity at extremely short distances and more precisely than has ever been done before,” says HSU Physics Professor C.D. Hoyle, principal investigator at HSU’s Gravitational Research Laboratory. “It may produce evidence that will either confirm or refute certain aspects of string theory.”

String theory is a unifying concept of physics which attempts to “explain everything in the universe” via the tiny scales of quantum mechanics—atoms, molecules, magnetism, electricity, and so on. String theory proposes that all known forces and matter in nature consist of one-dimensional vibrating strings of submicroscopic particles. Apparent differences in these invisible particles are actually changes in the strings’ vibrations, which could lead ultimately to deviations in, say, the movement and orbits of the planets. Hence, the scientific intuition recorded by the classical Roman writer Lucretius.

What Hoyle and his students will be trying to sort out are mathematical inconsistencies between the theory of relativity and quantum mechanics. It should be possible to integrate the two, synthesize them, in a single consistent model that describes the universe. String theory attempts to do that; it is aimed at unifying gravity with the other fundamental forces of nature. To date there is no experimental evidence for string theory and it presents complications of its own.

In Hoyle’s words, “It predicts a whole bunch of weird things like extra dimensions and the fact that gravity should behave differently when particles are very close together. The upshot is that our students will be looking for evidence of models of nature that try to unify gravity and quantum mechanics.” 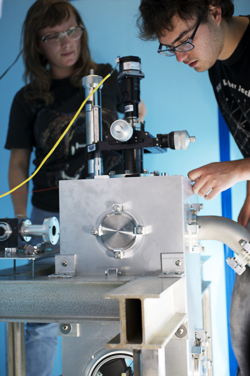 Working at the furthest cutting edge of laboratory physics, HSU students will build their own highly sensitive torsion pendulum that measures minute alterations in gravitational pull. The device is simple and basic; a torsion pendulum rotates rather than swings. It is akin to hanging a dumbbell from a fiber.

Torsion pendulums are used in clocks to prolong the time between windings.

The degree of twist in the suspending fiber measures the strength of gravity, enabling researchers to gauge whether the predictions of gravity’s behavior are correct or whether new effects are at work that might be more accurately described by small-scale string theory than by Einstein’s theory of relativity, which addresses how objects behave in the presence of large-scale gravitational fields. Both theories model nature, string theory on a microcosmic scale, relativity on a macrocosmic one.

Although a torsion pendulum is straightforward in concept and function, taking accurate table top measurements of gravitational forces is a demanding task. First of all, Hoyle’s students will be measuring distances that are almost impossibly small. The pendulum’s fiber may twist by an angle of no more than a nano-radian. How small is that?

Hoyle shares this illustration: imagine a lone pea on the ground in San Diego. The angle subtended by that pea all the way from the city to the Gravitational Research Lab in the Science A Building— is approximately one nano-radian!

“Those are the kinds of subtleties we’ll be dealing with in the lab,” Hoyle says matter-of-factly. “They explain why, even up to 10 years ago, gravity wasn’t tested below a millimeter. We didn’t have true confirmation that gravity even existed when subatomic particles are closer than a millimeter together because other effects can swamp it.”

The “other effects” confront student researchers with big challenges. Experiments on such infinitesimal scales have to take account of distorting environmental influences—thermal, electrical, magnetic, even seismic effects. “They can mimic string theory predictions and corrupt your findings,”
Hoyle explains. “You have to be absolutely certain that what you’re seeing in the lab is a new property of gravity and not, say, a grain of magnetic dust on the pendulum.”

Another thing: you don’t go down to the local hardware store to buy a torsion pendulum that functions at the one-micron level. Hoyle’s physics students are building their project from scratch. They will spend a good deal of time on developing the required hardware and techniques. “You can’t even buy the needed optical system to measure nano-radians of deflection,” Hoyle says.

So his students will pick up valuable experience in designing and building optical systems of their own. They will make their own electronic circuits to “read” and record physical and environmental parameters in the lab, such as temperature, magnetic fields, and seismic activity. They will gain hands-on experience with computer-aided design, software programming suites, software/hardware interfaces, data analysis, and science displays. “I gained much experience with a variety of programs, including Mathematica, LabView, and SolidWorks,” says HSU alum Dave Shook (’11) of his two years working side-by-side with Hoyle in the gravitational lab.

“This is exactly the kind of project that gives our physics students entrée to top graduate schools,” Hoyle notes. Nearly 50 percent of HSU physics undergrads go on to graduate school or industrial positions in physics—better than the national average. The department’s percentage of female majors and graduates also exceeds the national average, roughly 23 percent versus 16% percent nationwide.

Of the $117,000 total from the National Science Foundation grant, fully $40,000 will finance not only student research positions, but also costs for their peer-reviewed papers on various aspects of their experiments, which will be published in conference proceedings. Travel expenses will finance their attendance at meetings of the National Conference for Undergraduate Research and the American Physical Society.

Beyond that, the money supports a student position during part of each academic year at the University of Washington in Seattle, a Research I institution. Shook is spending 10 weeks there this semester, trading skills and experience back and forth with his peers in HSU’s “Grav-Lab,” as it is dubbed.

“Working in this laboratory proved to be a challenging application of the knowledge I acquired in undergraduate classes that I took in physics,” Shook recounts. “The lab research provided me with critical problem-solving skills and enabled me to participate in the National Conference of Research. These opportunities have given me a deep interest in general relativity and I’m considering a future in research.”