When he graduated from Humboldt State in 1970, Peter Underhill never imagined that students around the world would one day study his life’s work. Thirty-seven years later, however, Underhill’s research on the Y chromosome has shed new light on the history of human evolution.

On Friday November 16th Dr. Underhill will present aspects of his research at Humboldt State as part of the Biology Department’s seminar series. The public is welcome to attend the event, which will be held from 4:00 to 5:00 in Science B, room 135. 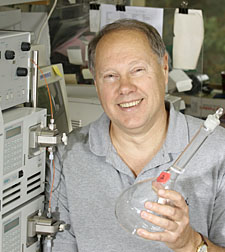 When Dr. Peter Underhill goes to work each day, he brings humanity one step closer to understanding its past. Underhill is a senior research scientist at Stanford University’s Department of Genetics.

“Basically, we’re reconstructing the story of human history,” Underhill explains. “Our research is like the laboratory equivalent of going back in history with a time machine.”

The time machine, in this case, is the Y chromosome. Every man has one. It’s only recently, however, that the Y chromosome has been used to map human evolution. It took Peter Underhill to make that happen. In the late `90s the Humboldt alumnus pioneered a research method that revealed the Y chromosome’s story-telling potential.

“The interesting thing about the Y chromosome,” explains Underhill, “is that it is passed down identically from father to son to grandson to great grandson and so on. The rest of the genome recombines with each generation. That makes it hard to look at certain segments of someone’s DNA and accurately trace back their lineage. The Y chromosome, however, provides a clear trace. Because it doesn’t recombine, the Y has become a relatively simple and elegant metaphor for human evolution.”

Underhill and his associates patented a process of quickly comparing the 60 million base pairs of nucleotides on one Y chromosome with the 60 million pairs on other men’s Y chromosomes. The process is known as Denaturing High Performance Liquid Chromatography and until he popularized it, finding mutations was, as Underhill puts it, “…a lot like moving a mountain with a teaspoon.”

Detecting these mutations, however, is the key to unraveling humanity’s tangled history. Each mutation reveals another branch on a man’s paternal family tree—going back tens of thousands of years. When mutations from a large number of men are assembled together, these genetic markers form a much larger family tree that maps the history of human evolution—from our beginnings in Africa, to our migrations across Europe, Asia and the Americas.

“Basically, in this lab, we look for differentiation patterns on the Y chromosome within global populations. “We could take any man in the world and now that we’ve identified many of these Y chromosome mutations or “markers,” we could place his Y chromosome on that global family tree.”

To date, five hundred Y chromosome mutations have been discovered. Underhill’s own lab has played a major role in finding many of the genetic markers, which is one reason his own name is commonly cited in genetics text books and journals.

“It’s gratifying to see our findings used in forensics kits, or genealogy projects, or being discussed on the Discovery Channel,” says Underhill. “It’s been a fun ride and I’ve been exceptionally fortunate to have experienced it.”

When he graduated from Humboldt State with a bachelor’s degree in oceanography, Underhill’s passion was plankton. Human evolution, he admits, has a bit more public appeal.

“There’s just something hard wired in our species that makes us ask, ‘Who are we? Where are we from? Who are we related to?’ What we’re doing here is helping to answer those questions.”