HSU took third place in the “Diversion Rate” category, besting campuses like Oregon State, Clemson and Duke University by keeping compostable and recyclable material out of the trash. HSU was also the top California university in the “Waste Minimization” category, beating out UC Davis, Berkeley and Harvard in reducing overall waste generated per person at a football game.

“This accomplishment is the direct result of a commitment to sustainability shared by students, the university and the greater community,” said HSU Sustainability & Waste Coordinator Morgan King. “We could not have done it without the efforts of our student volunteers and the cooperation and enthusiasm of the Athletics Department, vendors and game fans.” 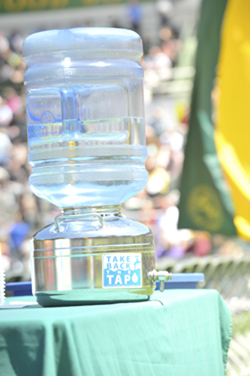 HSU participated in the Game Day Challenge during the October 20th home football game against Dixie State. Prior to the game, Campus Recycling placed additional recycling and compost collection bins around the stadium and tailgate area. Student volunteers with the Waste Reduction & Resource Awareness Program (WRRAP) were stationed at the collection bins to help fans recycle and compost. Announcements were made prior to and throughout the game to encourage participation, and HSU Take Back the Tap provided free filtered water to fans with refillable water bottles.

Following the game, Campus Recycling collected and weighed all trash, recycling and compost to find that the effort diverted nearly 80 percent of waste from the landfill. “The Game Day Challenge had multiple benefits,” said Morgan King. “It raised awareness and active engagement in recycling and waste reduction, it saved the University money in solid waste tipping fees, and it prevented the release of greenhouse gases associated with the hauling and land-filling of trash.”

The 2012 Challenge was run by the College and University Recycling Coalition (CURC), RecycleMania and Keep America Beautiful (KAB) and is supported by EPA’s WasteWise program.

According CURC, 79 schools and 5.4 million fans diverted nearly 1.09 million pounds of waste from football games, which prevented more than 1,732 metric tons of carbon dioxide from being released. The greenhouse gas emissions avoided is equal to removing 361 passenger vehicles from the road for one year.

For more information on the 2012 Game Day Challenge visit gamedaychallenge.org.