Humboldt State University Press is releasing its latest publication, Maasai Dictionary, on May 19. This book of translations from English to Maa (the language of Maasai peoples of Kenya and Tanzania) was compiled by Charles Richmond, circa 1940 during his time in the backcountry of Kenya colony, East Africa.

Richmond lived in Kenya from 1935 through 1951. He first arrived as a Captain in the King of England’s African Rifles, fighting alongside tribal chiefs in northern Kenya and Ethiopia against Mussolini during WWII. Subsequent to his military service, he returned to England to study theology and was ordained as a minister in the Church of England. Charles returned to the Maasai and Samburu tribes of central and northern Kenya colony near Lake Rudolph, as a missionary where he married and raised two sons. One of his sons is Rollin Richmond, Humboldt State University President Emeritus. 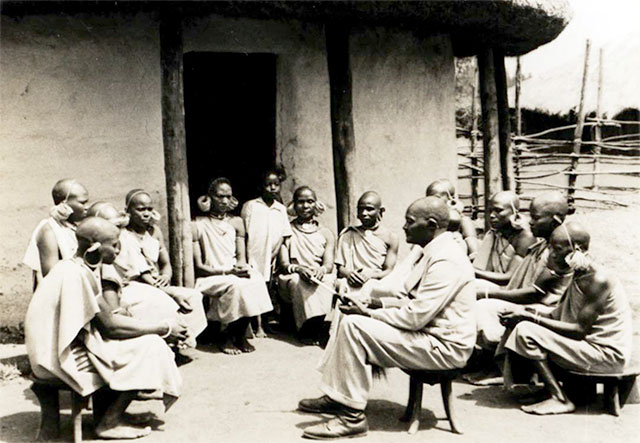 “When I found my father’s Maasai dictionary,” stated Richmond, “I thought that it might be useful to linguists to see an almost 80-year-old dictionary from a country that is changing as rapidly as Kenya. My father spent sixteen years as one of the only, or the only, foreigner in the region. He had a lot of respect for the Maasai and probably felt that Maa was an important language for foreigners to learn. My brother and I were actually raised speaking Swahili, as our parents spoke Swahili in the home and conducted church services in the language. I think it is interesting that, as a missionary, he didn’t write a book about converting Maasai people to Christianity. He wrote about communicating with them in their language.”

“I am pleased to see the development of a University Press because it not only allows for interesting books to be published and available worldwide, it can also attract good students and faculty,” stated HSU President Emeritus, Richmond.

“At Humboldt, we want to make a difference, and open access publishing aligns with our vision for social justice and sustainability by reducing costly barriers to connect author and reader, teacher and learner,” explains Cyril Oberlander, HSU Library Dean. “Launching Humboldt State University Press offers authors an open access publishing platform to reach their readers and to showcase the high-quality work of our authors, researchers, and scholars.”

“I am really grateful to Humboldt State University Press for publishing this 1940s era Maasai Dictionary,” states Richmond. “As I get older, I think about what I will leave behind. I hope that this dictionary helps people understand and communicate with each other.”

Maasai Dictionary by Charles Richmond can be downloaded for free at: http://digitalcommons.humboldt.edu/reprint/2/