Humboldt State student-athletes are taking to the courts and fields with a new logo. 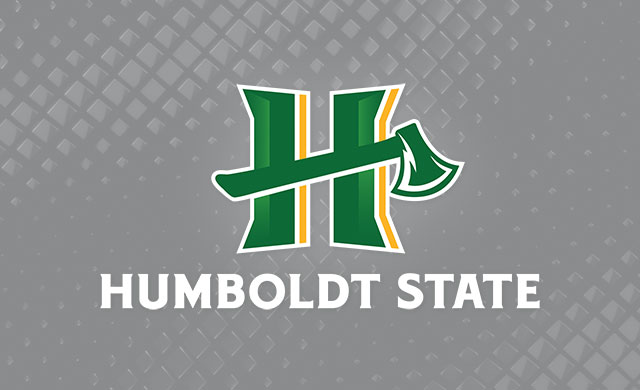 The bold new design reflects the Lumberjacks’ history and reimagines the iconic axe emblem. It also ties strongly to the University’s “Spirit H”—looking almost as if the “H” has become energized and ready to play. The logo will adorn the Lumberjack Arena floor, athletes’ practice gear and equipment, and products available to campus and the community.

The logo was designed in consultation with student-athletes, coaches, boosters, alumni, faculty, and staff, as well as partners and suppliers. The goal was to reflect the character and strength of HSU Intercollegiate Athletics & Recreational Sports as well as the pride of the broader University. The design process included extensive research, design, assessment, and focus group feedback.

The logo’s design process was itself a bit of an endurance test. The initial year-long redesign effort led to a nearly completed logo, but then had to be put on hold due to the pandemic.

“The new logo represents a bolder identity for HSU athletics,” says Jane Teixeira, Director of Intercollegiate Athletics & Recreational Sports. “It encompasses the pride of the Humboldt community and the excellence we focus on as a department and as an institution. Even though we started the logo process a while ago, sharing it with the community feels even more special after the challenges of the past year. I’m excited for the future and grateful to the University and to those who led the way on the creation of the new logo.”

The redesign was undertaken with help from the Osaki Creative Group, which has designed logos for products, universities including San Diego State, and professional teams including the San Francisco 49ers and Tampa Bay Buccaneers. Through hundreds of concepts and iterations, the team helped HSU arrive at a collegiate sports design that stands out while also being clear and simple.

The group worked with campus partners through several rounds of design and redesign. It was decided early on that the campus was looking for a streamlined logo and preferred a riff on a simple monogram—an image that combines letters and images to form a symbol. It was also determined that the mark should represent HSU athletes, and that it should include aspects of HSU’s past, present, and future.

The final design is a dynamic symbol that combines the letter H in motion and the iconic axe. It incorporates an integrated lightning bolt motif—a nod to HSU’s first team name, the Thunderbolts, which was used until 1936. It adds action with angles and movement. And, of course, the color version of the new logo is proudly Green and Gold.

“We’re happy with the redesign, but the real strength of this new logo will come from the student-athletes themselves,” says Frank Whitlatch, Vice President for University Advancement. “On its own, the logo is basically just a drawing. But people will see the logo at games and on campus, and they’ll begin to associate it with the determination, spirit, and camaraderie of our student-athletes.”
In conjunction with the rollout of the new logo, the Lumberjacks have revamped the official Athletics website for the first time in four years. It is at hsujacks.com.

A multi-month collaborative effort between the Humboldt State University Office of Sports Information and Syracuse, New York-based SIDEARM Sports, a national leader in athletics website development, culminated in the website redesign. Along with a fresh layout and feel, the site is packed with new features and SIDEARM’s latest technologies, creating an immersive experience for Lumberjack supporters. Visit the new website at hsujacks.com.

Download the new logo, as well as Zoom backgrounds and email signatures here. Apparel and other merchandise will be coming to the HSU Bookstore in coming months.

Note: This story was originally published on April, 7, 2021.