Kamome goes to the Olympics

NBC Sports aired a documentary about the boat Kamome, a small boat ripped from Japan in the March 2011 tsunami that beached in California’s northern Del Norte County two years later, as part of their Olympic Games coverage on NBC stations throughout the country.

The small training boat was traced to Takata High School in Rikuzentakata, Japan. Del Norte High School students in Crescent City, California decided to clean up the boat and send it back to the school in Japan. This small act of kindness began a series of improbable events, resulting first in student exchanges between the two schools, a sister school agreement and, in 2018, a formal Sister City relationship between Crescent City and Rikuzentakata.

The connection also resulted in a children’s book now available in eight languages, an online school curriculum and animated versions of the story in English, Japanese, and Spanish.

NBC always chooses at least one story to highlight a special relationship between the host country and the United States. 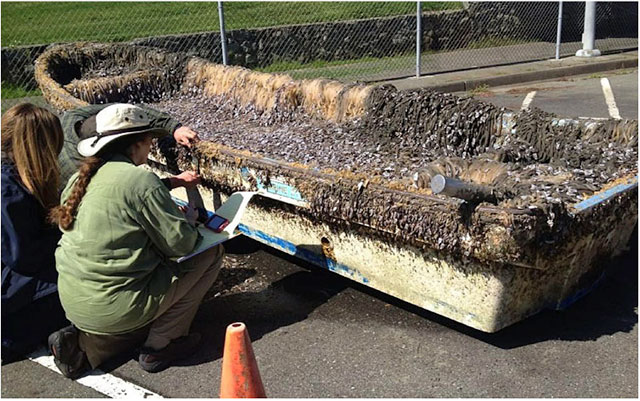 The 23-minute NBC Kamome documentary features the remarkable similarities between Rikuzentakata and Crescent City. Both are small cities far from commercial centers and have had economic challenges in the decades before the tsunami. Both are dependent upon fisheries and timber industries. Both are renowned for rugged coastlines and spectacular scenery. And both share similar earthquake and tsunami hazards.

The small City of Rikuzentakata, located in Iwate Prefecture about 250 miles NNE of Tokyo, was home to about 24,000 people before the 2011 Great East Japan earthquake and ensuing tsunami. It was hard hit by the tsunami. The entire downtown area, including City Hall and the schools, was destroyed. Surviving students were relocated to attend schools in available spaces outside of the city. 2011 was not the first time Rikuzentakata suffered tsunami damage. The great Sanriku tsunami of 1883 and the tsunami spawned by the 1960 Chile earthquake also ravaged the City’s coastal areas.

Crescent City, California also has a long tsunami history. The worst historic tsunami was in 1964 when 29 city blocks were flooded by the Great Alaska earthquake. Eleven people in Del Norte County died. Tsunamis in 1957, 1960, and 2006 also caused some damage to the harbor. The 2011 Japan tsunami reached Crescent City nine and a half hours after the earthquake, destroying boats and docks. Fortunately, the tsunami warning systems alerted officials and most of the commercial fishing fleet was able to safely exit the harbor before the surges hit. 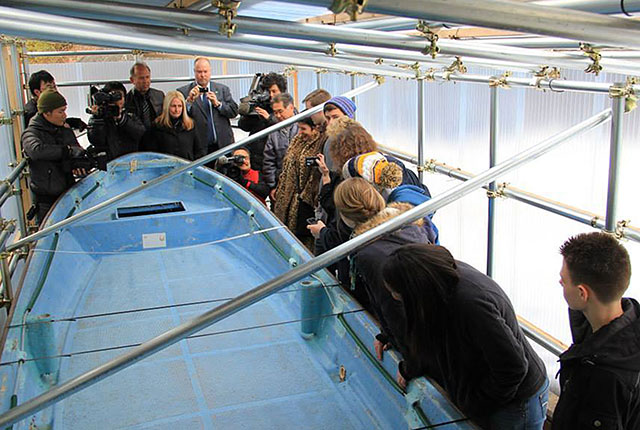 The return of Kamome to Rikuzentakata 31 months after the earthquake brought joy to a community struggling with loss and the hard work of recovery. The small boat became a symbol of resilience, not only in Rikuzentakata but during display tours at the Tokyo National Museum, Nagoya, and in the Kyoto area. The first student exchange occurred in February 2014 when six Del Norte High School students visited Japan. Eleven months later, 14 Takata High School students made the visit to Crescent City.

A formal Sister City agreement was signed by officials of both cities in April of 2018 in Crescent City and, two months later, in a signing ceremony in Rikuzentakata. Officials from the two cities have involved not only cultural and business exchanges, but emergency preparedness as well. The Rikuzentakata experience has opened the eyes of Del Norte officials about the impacts of a tsunami generated from nearby and how important community education is to preparedness efforts. 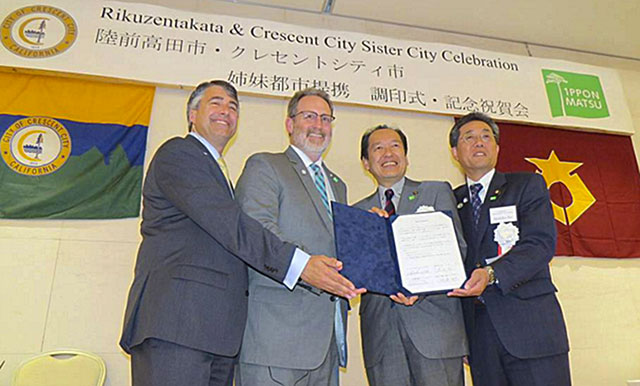 The NBC Sports documentary shows how Kamome has become a symbol of resilience in both Japan and California. The documentary features footage in both Crescent City and Rikuzentakata and interviews with students involved in the exchange, City officials, and HSU retired Geology Professor Lori Dengler, who was instrumental in connecting Kamome to Rikuzentakata.

The little boat that survived a tsunami and traveled nearly 5,000 miles to California has returned home. Two communities, separated by the Pacific Ocean, language and culture, have discovered that they are far more similar than they are different.

The documentary can be viewed for free on NBC’s PeacockTV streaming service. Information on how to access PeacockTV is available at this website, along with other links as to the story of the boat, tsunami debris, the exchange, and Sister City relationship.

This story was originally published on July 29, 2021