For Clara Lazen, 10, a classroom assignment turned into a scientific finding. As Chemistry Professor Robert Zoellner confirmed, the fifth-grader's curiosity led to a new molecule, and her first mention in a scientific journal.

When Kenneth Boehr instructed his fifth grade class at Border Star Montessori School in Kansas City, Mo. to build molecules with modeling kits, he didn’t expect one of his students to make a scientific discovery. 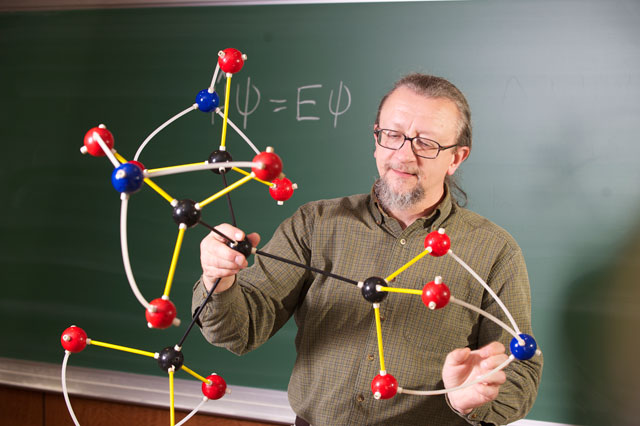 But that’s what happened when Clara Lazen, 10, randomly arranged a unique combination of oxygen, nitrogen and carbon atoms. The result was a molecule that Boehr had never seen before.

So he emailed longtime friend and HSU Chemistry Professor Robert Zoellner, a computational chemist who uses computer software to mathematically model the properties of molecules.

“Ken sent me a picture of the molecule on my cell phone and usually I can tell right away if it’s real,” Zoellner says. This time, he couldn’t.

So he plugged the arrangement into Chemical Abstracts, an online database searchable through the HSU Library that contains chemistry-related literature published since 1904.

Only one paper came up, Zoellner says. It was for a molecule with the same formula but a different arrangement of atoms than Lazen’s. 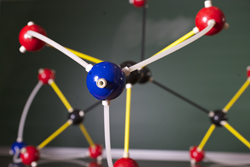 Zoellner dug a little deeper and determined that not only was Lazen’s molecule unique, it had the potential to store energy. It contains the same combination of atoms as nitroglycerin, a powerful explosive. If a synthetic chemist succeeded at creating the molecule—dubbed tetranitratoxycarbon for short—it could store energy, create a large explosion, or do something in between, Zoellner says: “Who knows?”

Zoellner submitted a research paper on his findings to the January issue of Computational and Theoretical Chemistry. Both Lazen and Boehr are listed as co-authors.

In an interview with local media, Lazen said she never thought she’d be a published author by age 10.

“Most 10- or 11-year-olds don’t get their names in a science paper,” she told the Kansas City Star.

Zoellner says it still remains to be seen how the research paper will be received. Since scientists are always looking for new ways to harvest energy, synthetic chemists might try to create the molecule, he says. If they succeed, they could discover a new way to store energy.

Regardless of what happens, the experience has already strengthened Lazen’s interest in science, Zoellner says. She is particularly interested in biology and medicine. It’s refreshing, Zoellner says, because so many women shy away from science careers as they get older.

“Women are often better prepared for high school and college than men but they decide not to pursue science careers for whatever reason,” Zoellner says. “If I’ve been able to keep her and some of her classmates interested in science, I’ve succeeded.”