Will campuses remain open during a strike?
Campuses are preparing for strike activity and will remain open. Administrative services will be available. We anticipate that many classes will continue to meet as not all faculty will strike. Students should check with their instructors about their individual class schedules.

How will a strike impact students?
The strike should not interfere with students being able to complete their semester or quarter courses and graduate on time. Striking faculty will generally arrange for assigned reading or other work if their classes are cancelled. We anticipate that many faculty will not go on strike and their classes with be held as scheduled.

Can faculty members use class time to discuss strike-related issues with their students?
Faculty members may use class time to give students information such as changes to the class schedule or alternative assignments if the class will not be meeting as scheduled. In general, however, faculty members cannot and should not use classroom time to discuss other issues related to the strike, unless such a discussion is directly relevant to the content of the course. That will not be true in the vast majority of cases. Even if the discussion is relevant to the course content, faculty should not use this opportunity to insert their own opinions or to try to persuade students to support or oppose the strike.

Can faculty require students to participate in the strike?
No individual, including students, can be forced to take either the administration’s position or CFA’s position. Students cannot be compelled to walk out of class, walk picket lines or otherwise support the strike as part of a class assignment or in exchange for a grade.

General Information About the Strike

The CFA has asked for a 5% General Salary Increase (GSI) plus a Service Salary Increase (SSI) for all eligible faculty, which equates to a further 1.2% increase in faculty compensation costs. The total cost of the CFA proposal is $102.3 million.

The CSU has offered a 2% increase to the faculty compensation pool, which would cost an estimated $33 million. This 2% compensation pool increase was included as part of CSU’s 2015/16 budget request authorized and approved by the Board and Trustees (and enacted by the Legislature and governor). The 2% increase is consistent with the amount negotiated with all other collective bargaining units in the CSU, as well as what managers and executives received. However, if the CSU were to pay the 6.2% increase requested by the CFA, it would cost the CSU an additional $40.7 million in salary increases to other bargaining units because of “me too” language in their agreements. 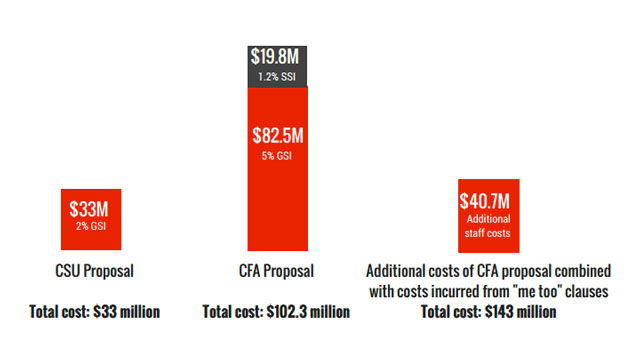 Money that would cover this gap was not funded by the Legislature for the 2015/16 year. This money would have to be cut from other operating expenses.

Why has CFA authorized a strike?
It is a normal part of the process for a union to vote to authorize a strike prior to conclusion of the negotiation and impasse process to allow for time to prepare for any possible concerted activities.

Where are we at in the process of negotiations?
Both parties have attempted in good faith to negotiate a settlement, but those efforts have not been successful. The Higher Education Employer Employee Relations Act requires the CSU and CFA to go through a statutory procedure when the Public Employee Relations Board (PERB) certifies that the parties are at impasse. That certification by PERB was given back in July, 2015. Since then, the parties have been through a mediation phase without success. PERB then certified the parties to the
final stage of statutory dispute resolution procedure called “fact-finding.”

The fact-finding process is a formal evidentiary proceeding overseen by a neutral third-party. At the end of the process, the fact-finder, together with a representative from each party, will issue recommendations to the parties for settlement of the issues in dispute. After the report is sent to the parties, there is then a 10-day “quiet period” during which the contents of the
report are held privately by the parties so as to encourage settlement based on the advisory recommendations. If no agreement is reached at this stage in the process, the CSU has the option of implementing its last offer to the CFA and the CFA has the option to initiate concerted activities, including a strike. We expect the fact finder to issue recommendations in the middle of March to early April.

Why doesn’t the CSU just pay the 6.2 percent and avoid the strike?
The CSU believes that all employees should be properly compensated for their service and contribution to our university and students. Employee compensation has been, and continues to be, a priority for the Board of Trustees. The CSU has taken a balanced budget approach to employee compensation by investing in employees while also addressing other priorities
(including hiring more tenure-track faculty, expanding academic programs and services that support student degree completion, increasing enrollment for students, investing in technology and infrastructure, and more).

When will the strike occur?
There is no legal authority for the CFA to strike at this time. However, the CFA passed a resolution authorizing a strike on all 23 campuses on April 13-15 and April 18-19, 2016 should there be no agreement between the parties at the conclusion of the statutory impasse procedure.

Will faculty be paid while on strike?
If faculty are not performing any of their assigned duties or responsibilities as a result of engaging in concerted activities, then by law they cannot be paid.

Where can I go for additional information about potential strike activity?
Updates and information is available at www.calstate.edu/hr/employee-relations/bargaining-updates/