Reviving the Language – and Culture – of the Wailaki People

For the first time in generations, people are beginning to speak Wailaki, partly thanks to the research efforts of Native American Professor Kayla Begay. The language of the Wailaki people, who lived along the Eel River watershed, was all but lost by the early 20th century, a cultural victim of the decimation of California’s Native population. 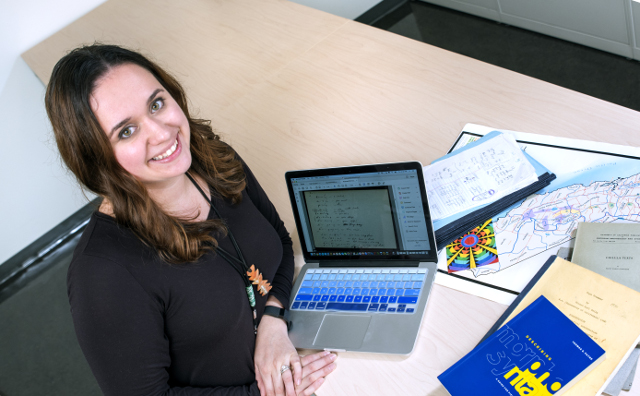 Now, Wailaki joins other Native languages continuing to be spoken and revitalized in California. It’s a vision of the future – and a revival of the past – that’s at the heart of Begay’s research.

Her work focuses on developing a working grammar of Wailaki. One of about 80 Native languages in California, Wailaki shares some similarities with Hupa, though it’s not as well documented. A polysynthetic language, one Wailaki word often contains what in English could need an entire sentence.

Begay is a Hoopa Valley Tribal member of Hupa, Karuk, and Yurok descent. She’d always been interested in language, but it wasn’t until her undergraduate studies at Stanford that she zeroed in on linguistics, earning a degree with honors as well as a minor in Native American Studies. Though she saw a connection between the disciplines, the programs weren’t connected. “I kind of had to make my own path,” she says.

She found a convergence of those disciplines at UC Berkeley’s Linguistics Program, where she earned a master’s degree and is currently finishing her dissertation for a doctorate, entitled “Topics in Wailaki Grammar.” Berkeley is home to a program with a history of studying and archiving California indigenous languages – it’s there that Begay found the crossover between Native American Studies and linguistics that she’s brought to Humboldt State.

“I feel responsible, not just to my language but to all California Native languages as well, so people have resources to learn them and they continue to maintain them,” Begay says.

Begay says she’s creating a tool for educators and community members to use. “A lot of the work teaching and getting the language spoken is being done by those community members,” she says. The working grammar gives those speakers a reference guide that they can interpret, adapt and build upon as they like.

Round Valley School District is home to a Wailaki language program, and Begay has worked collaboratively with the community. Recently, students were seeking to show support for the Dakota Access pipeline protestors with a Wailaki language video, but they were struggling with how to say “Water is Life,” a phrase that came to symbolize support of the movement. So Round Valley Elementary/Middle School Principal Cheryl Tuttle reached out to Begay to help with a translation.

To map out the language, Begay has been turning to old texts, like those of Pliny Earle Goddard, a language scholar who studied California Native Languages in the late 19th and early 20th centuries. Begay, along with Round Valley High School educators Tuttle and Rolinda Wantt, and UC Davis Native American Studies Professor Justin Spence, was invited this summer to present at the American Philosophical Society on her work, and was presented with copies of some of Goddard’s original works on Wailaki.

Begay has enlisted the help of two Native American Studies students, both of whom approached Begay after hearing about her research.

Jocelyn Edmonson is one of those students, and her fascination with old documents initially drew her in. “There’s something that makes me really happy and giddy about primary sources. It’s reaching back through history.”

She’s been archiving the Goddard texts, going through digital photos of the original documents and typing up the notes. The work is “meditative,” she says, and while the focus of her studies is federal Indian policy, she finds linguistics interesting and sees a connection between Native languages and the law.

Speaking Native languages connects individuals with their cultures and communities. “So much of culture is evident in the way we structure languages and concepts in our languages. It’s one of the many forms of continuance we have,” Begay says. “It usually leads into other avenues for the Native communities to strengthen themselves.”

Youth who grow up learning second languages are shown to have better rates of graduation and academic success.

Begay’s seen that firsthand, in work she’s done with the Head Start program in Hoopa and with the successful Round Valley schools’ Wailaki reintroduction program, which has seen success teaching high school kids the language. Students have created videos and presentations entirely in Wailaki.

Studying, restoring and preserving—and simply using—Native languages has tangible social and cultural effects on the health and wellbeing of communities. “You need all of the tools in the toolbox and that’s one of them,” Begay says.