The Schatz Energy Research Center (SERC) at Humboldt State University has been awarded $94,993 by the California Energy Commission to examine the use of biomass (plant matter) to convert heat energy into chemical energy and save on the natural gas consumed by electric power plants. 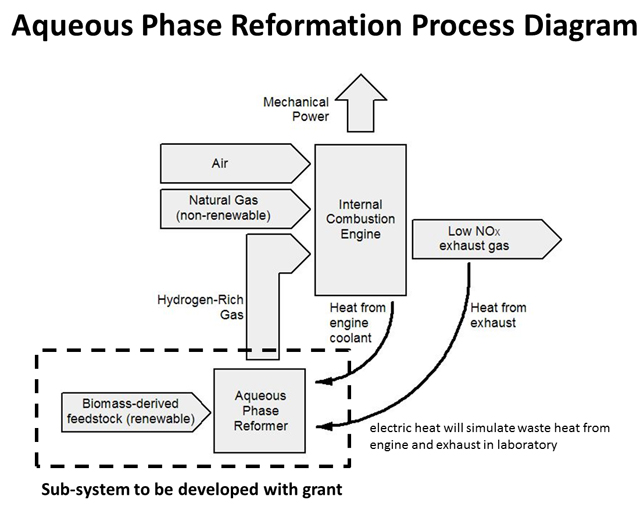 SERC estimates the state might be able to save as much as $9 million a year by replacing a large share of the natural gas consumed by certain types of existing power generation equipment without having to make major, and costly, modifications to it.

“This would not only reduce natural gas consumption, but also reduce emissions from electric generation equipment and improve its overall efficiency,” according to Vernon.
Specifically, Vernon will conduct experiments with sorbitol, a sugar alcohol found in some fruits or derived by processing glucose, a sugar found in plants. Technology is being developed to make sorbitol from low-value material like crop waste.

The new SERC project marks a first: aqueous phase reformation has not been used in this way before. If the new technology proves successful, Vernon says, “This could be a relatively inexpensive way to increase the portion of electricity generated in California, and elsewhere, with renewable resources.”

The grant marks the second time in a month that the Schatz Center has shared in a funding award from the California Energy Commission for biomass power. SERC is a partner with the Redwood Coast Energy Authority (RCEA), Eureka, in connection with the commission’s $1.75 million initiative for community renewable energy, including a biomass power system at Blue Lake Rancheria, community-wide energy upgrades throughout the Mad River Valley region and electric vehicle charging stations.

The contract for that project is expected to be signed in June. It derives from renewable energy planning recommendations in the “RePower Humboldt Strategic Plan,” a joint effort of the RCEA and the Schatz Center under the commission’s “Renewable Energy Secure Communities Program.”