A report from Humboldt State’s Schatz Energy Research Center describes the scale of backup generator (BUGS) use, and the associated pollutant emissions, in economically developing countries worldwide. This study is the first global report on BUGS -- and the first step in understanding how and where these generators might most effectively be replaced with renewable energy. 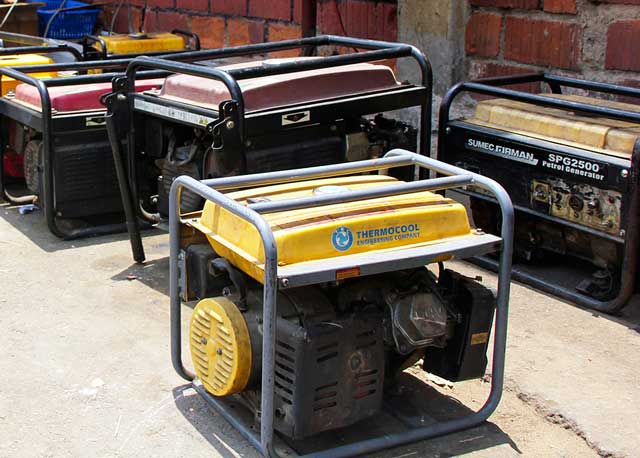 Between 1-2 billion people live without reliable access to an electrical grid. Homes and businesses in these communities suffer outages that last from hundreds to thousands of hours each year—if a grid is even available and affordable. To supply both their intermittent and ongoing electrical needs, many people rely on backup generators. And, while generators increase energy access, they also emit air pollutants, create sound pollution, and can carry significant fueling costs. BUGS are also frequently used inside homes and businesses, further increasing the risk of exposure.

To assess the benefits of replacing BUGS with clean and renewable energy systems, a baseline understanding is needed of where BUGS use and impacts stand today. Over the last year, Schatz Center staff developed a modeling framework to estimate current generator usage and system characteristics, and emissions associated with public health and environmental impacts. They then applied the best available data from 167 low- and middle-income countries to create the first global profile of BUGS.

In collaboration with the International Institute of Applied System Analysis, the results have been used to update an emission inventory that provides critical input to climate and air quality models used by planning agencies worldwide.

Among the key findings:
— Global BUGS use is massive. An estimated 25 million generators are deployed in the 167 countries surveyed. Seventy-five percent of those BUGS are operated from locations where a grid connection does exist, but is of marginal quality—either unreliable and/or unaffordable. And, the study found that small gasoline generators (under 5 kW) account for over three quarters of the global fleet.

— The countries examined spend in excess of $40 billion in total on generator fuel each year. In much of sub-Saharan Africa, communities spend more for generator fuel than is spent to maintain and manage their national electric grid. Co-project lead Nicholas Lam explains, “This work really brings to light the immense scale at which polluting fossil-fueled generators are relied upon in developing countries. That BUGS are so broadly used as a stopgap measure for unreliable electrical grids demonstrates that grid quality is a critical pillar of energy access.”

— Across the countries studied, the report found that BUGS emit a total of 1,500 kilotons of nitrogen oxides (NOx) annually. In Africa, BUGS alone account for 7% of the NOx emitted each year. Nitrogen oxides are primary components of smog and acid rain, and exposure can cause respiratory disease, and heart and digestive complications.

This project was developed in partnership with the International Finance Corporation (IFC), a sister organization of the World Bank and member of the World Bank Group, and funded by the IFC with support from the IKEA Foundation, and the Dutch and Italian governments.