Research by scientists at Humboldt State University and the University of California Cooperative Extension in Eureka indicates that the onset of sudden oak death in North Coast forests could have major implications for the area’s long-term forest fire threat. 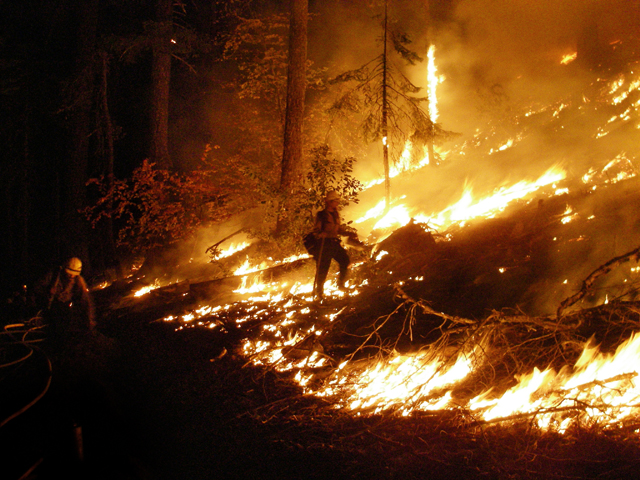 The non-native disease, which was discovered in the Bay Area in the mid-1990s, is found in 14 coastal counties in California, from Monterey to Humboldt. It has infected 10% of the at-risk areas in the state.

Sudden oak death thrives in the coastal climate, and has killed hundreds of thousands of tanoaks and true oaks in the last 15 years. Tanoak, which dies quickly from the disease, is one of the most flammable oaks in California. It is also the hottest burning hardwood in North America.

Dense stands of tanoak blanket Humboldt County. Morgan Varner, a Humboldt State professor who specializes in fire behavior, says land and forest management officials are confronting an infestation that is hard to track and contain across the North Coast landscape. It could present major complications under wildfire conditions.

Although only one percent of Humboldt County is currently infected, the disease is spreading and many areas are in jeopardy. Portions of the Van Duzen and Mattole River basins are at risk, as are portions of the Kings Range and the Eel, Mad, Klamath, and Trinity River riparian belts. Within affected areas, the disease could eventually remove most if not all tanoaks, causing a potential cascade of ecological effects of unknown magnitude. 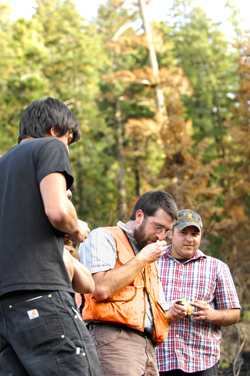 Varner warns that the most tragic potential location would be an area somewhere in the Klamath basin. “The basin is home to tremendous tanoak forests on the Trinity, Klamath, and Salmon Rivers,” he notes. These areas are also prone to wildfire, and recent research by Varner and others shows that sudden oak death can be a game-changer when it comes to fuels and fire.

The disease drastically reduces the moisture content of leaves and foliage. Dead trees devoid of moisture pose a high risk of crown fires, which burn with exceptional heat and speed. They can also cause prolonged ecological damage. Owing to their height, crown fires are also more likely than ground blazes to be whipped up by prevailing winds.

The danger is intensified by a specific characteristic of the disease: tanoaks that die from sudden oak death experience prolonged leaf retention, up to two years or so. Crowns bear heavy fuel loads for extended periods, primed for ignition by extreme dryness.

Eventually, these dead leaves drop to the forest floor, further compounding the fire threat. It is both a short- and long-term risk, stretching out in phases for as long as 10 years. Tanoak leaves drop, then the branches. Eventually the tree itself topples.

“These unnatural fuel arrangements can lead to fires so intense that you can’t combat them with standard, ground-based firefighting tactics,” Varner said. “You just have to move back, and let them die down.”

This is one of the principal findings of a new research paper published by Varner and Yana Valachovic, adjunct HSU faculty member and UCCE Forest Advisor, in the journal Forest Ecology and Management (posted at www.elsvier.com/locate/foreco).

Their second key finding is that fallen tanoaks contribute greatly to fuel loading on the forest floor, and it can take years for those fuels to break down. As Valachovic says, “In this way, the disease creates a hazardous fuels situation that is passed on to firefighters during wildfire—
they must combat blazing downed trees, patches of increased winds and fire behavior and other physical and logistical obstacles.”

This is partly because of the deadly link between fire intensity and flame length. As flames grow longer, their intensity increases exponentially. According to Varner, “when a tree crown is on fire, it’s not just that the flame is twice as long, it’s that the heat intensity is many times greater.” Fighting fire by hand under these conditions is neither safe nor feasible.

Heavy rains and consecutive wet springs speed up the spread of sudden oak death. After the wet spring of 2010, UCCE and its partners have seen more pathogen spread in Humboldt County than in previous, drier years.

The pathogen survives on the branches and leaves of most affected plants and is easily dispersed. Laboratory tests are required for diagnosis because the symptoms of sudden oak death mimic those of other agents, like insects, fungi or bad environmental conditions.

The California Oak Mortality Task Force, founded in 2000, provides state residents with the latest information about the disease. It cautions citizens to learn, for example, about the sources of the firewood they purchase for their homes. For more information, visit suddenoakdeath.org.