'Something Rotten!'—Singing, Dancing, and Over-the-top Characters 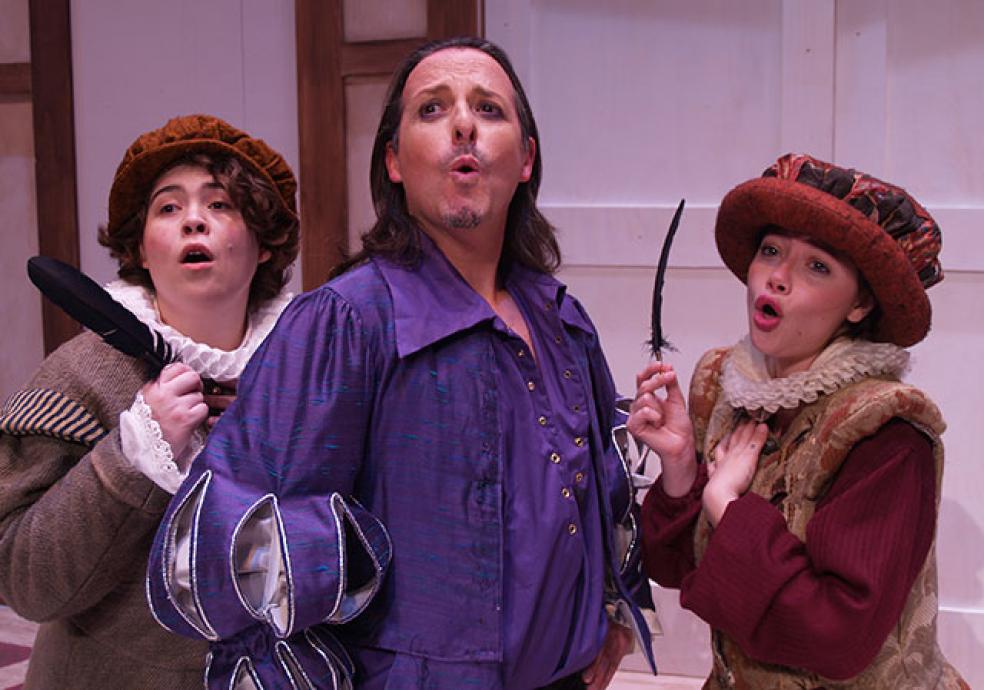 “Something Rotten!” opened on Broadway in 2015 and received 10 Tony Award nominations including Best Musical. The story is set in the 1590’s. Brothers Nick and Nigel Bottom are desperate to write a hit play but struggle to find success in the theatrical world as they compete with the wild popularity of their contemporary William Shakespeare. When a local soothsayer foretells that the future of theatre involves singing, dancing, and acting at the same time, Nick and Nigel set out to write the world’s very first musical. But amidst the scandalous excitement of opening night, the Bottom Brothers realize that reaching the top means being true to thine own self, and all that jazz.

Time Out New York referred to the play as “the funniest musical comedy in at least 400 years.”

“Yes, that is a ridiculous statement but it seems to capture the fun spirit of this play,” says director Michael Thomas. “For example, some of the townspeople in the show sing about the ‘latest gadgets and appliances’ as they hold up a washboard, a bellows, and a toilet plunger. The music comes with built-in anachronisms—the audience will hear phrases from 20 contemporary musicals including The Sound of Music, Chicago and West Side Story. We present a rather humorous tongue-in-cheek world in this production. Sort of like 16th-century Shakespeare meets 21st-century Broadway. The script manages to both praise and make fun of musicals. It all adds up to a very funny show.”

“Something Rotten!” features large song and dance numbers, and some over-the-top characters.

Performing in a musical offers a unique and valuable experience for students. Music Director Elisabeth Harrington says that being in a musical “requires much endurance and collaboration, and invites all participants to extend their awareness beyond themselves. It is the quintessential ‘team sport’ of the performing arts world. Because almost all musicals feature lead roles, supporting roles, and an ensemble, participants can be at almost any stage of their acting, dancing, and singing development and be involved. The sense of community and unified mission created while rehearsing in a musical is unparalleled in other academic classes and activities.”

Thomas adds that “this is the first time in two years that we have welcomed live audiences back into the theatre. To say that the students (and faculty) have looked forward to this would be a major understatement! It’s a great opportunity to support the students and to enjoy once again the unique experience of live theatre.”

“Something Rotten!” has 19 cast members, mostly students at Cal Poly Humboldt along with a few community members. The role of Nick Bottom is played by Jeremy Stolp, Nigel Bottom by Austin Maisler, Shakespeare by Jaese Lecuyer, Bea by Miah Carter, Portia by Samantha Talley, Nostradamus by Sammi Pietanza, and Shylock by Garrett Vallejo. Scenic design is by Bob Pickering, lighting design by alumnus Michael Johnson, costume design by faculty member Rae Robison, properties design by alumna Laura Rhinehart, and hair and make-up design by Isabella Glover. Music direction is by faculty member Elisabeth Harrington and Carrie Walpole, also a faculty member, has created the choreography. The production will be stage managed by Benji Salisbury and David Fisher.

“Something Rotten!” opens Friday, March 25 at 7:30 p.m. in the Van Duzer Theatre and continues March 26, April 1, and April 2 at 7:30 p.m. There will be two matinee performances beginning at 2 p.m. on Sundays March 27 and April 3. General admission is $15. Student and Senior admission is $10. Recommended for high school age and older. Lot parking is free on Friday nights and weekends. Proof of Covid vaccination or Cal Poly Humboldt ID is required for entry. For tickets, please call 707-826-3928 or go online to Cal Poly Humboldt Center Arts here.