Fulbright Scholar to Spread Disability Awareness in the Caribbean

Humboldt State’s latest Fulbright scholar will take her expertise to the Caribbean island nation of Trinidad and Tobago in January to study and encourage inclusivity for people with disabilities in sports and recreation; and in higher education. 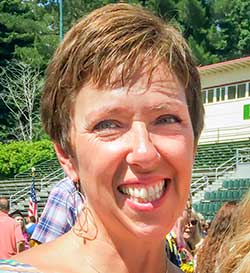 Humboldt State’s latest Fulbright scholar will take her expertise to the Caribbean island nation of Trinidad and Tobago in January to study and encourage inclusivity for people with disabilities in sports and recreation; and in higher education.

Recreation Administration Professor Jayne McGuire’s background in special education, curriculum design, and recreation led her to the University of the West Indies, where she will look at attitudes toward people with disabilities and offer workshops for faculty and students.

It’s an important time to work on disabilities in Trinidad and Tobago, McGuire says, where there are no current laws for disabilities rights. The U.S. has the Americans with Disabilities Act and special education laws for public schools that guarantee equal education rights.

“The country of Trinidad and Tobago has no laws now but is desperate to put something in place,” McGuire says. “People there are aware human rights are being violated because they have no legal rights. It’s an exciting time to go and help them.”

McGuire began looking for a Fulbright opportunity in 2014 and discovered a close match to her interests and skill set in Trinidad and Tobago.

She’ll spend part of the spring semester working directly with college students who have disabilities that affect their learning, working with them one-on-one as well as hosting workshops to build skills like time management and utilizing individual strengths.

She will also conduct a survey on faculty attitudes toward students with disabilities. One of her goals is to lead a six-week voluntary faculty workshop on disability awareness and Universal Design for Learning, following by another assessment to gauge if attitudes changed among its participants.

Finally, she’ll be partnering with Special Olympics Trinidad and Tobago to expand the organization’s unified sports programs, which bring together people with and without disabilities through sports. The soccer program will include students, faculty, and community members interested in sports and education, which also plays into The University of the West Indies’ desire for more service learning opportunities.

McGuire spent some time in Trinidad last year during a Caribbean-wide conference on disabilities and said she’s made good connections and laid the groundwork in anticipation of her fellowship.

Originally started as an independent offshoot of the University of London, The University of the West Indies currently serves 17 English-speaking regional territories, offering undergraduate and postgraduate degrees in numerous fields of study: the arts, sciences, business, law, the humanities.

The Fulbright Program provides grants to graduate students, scholars, and professionals to increase mutual understanding between the United States and other countries. The program is sponsored by the U.S. Department of State’ Bureau of Educational and Cultural Affairs. In 2013, Humboldt State was named a top school for Fulbright scholars by the Chronicle of Higher Education.