Spreadsheets, research groups and a large portion of the class grade were not the only outcomes of the second research project in Lonny Grafman’s ENGR 308 class.

In fact, the original, local and student-led research will be used by the city of Arcata to help inform its decision on whether to impose a citywide ban on single-use plastic bags. 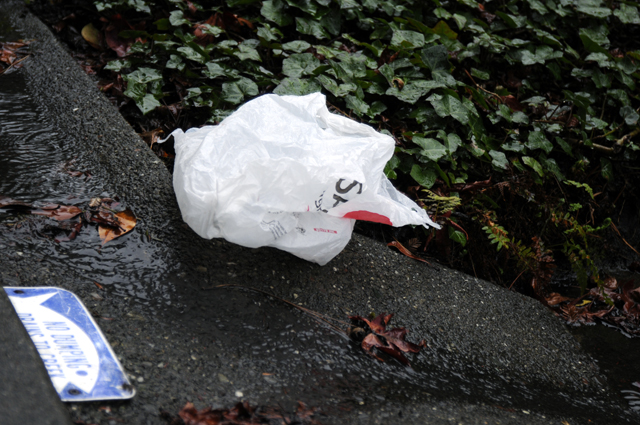 The “Arcata Plastic Bag Project,” was a student-run project in Environmental Resources Engineering lecturer Lonny Grafman’s general education course, Technology and the Environment. The project, completed this fall, partnered students with the city of Arcata to research and analyze the environmental impacts of single-use plastic bags, and what kind of effect a citywide ban would have.

“Engineering 308 is an analysis class specifically about the intersection of technology and the environment,” Grafman says. Student in the class learn how to use math and science to understand and analyze the environmental impacts of products and technologies–including the impacts of single-use plastic bags–and then use that information for real-world applications.

“All of my classes are service learning classes, so they all work with clients,” Grafman says. “Usually clients come to me, but this was kind of a new class. I had to find a client or a project that would meet the academic needs of the class and still have a real world impact.” 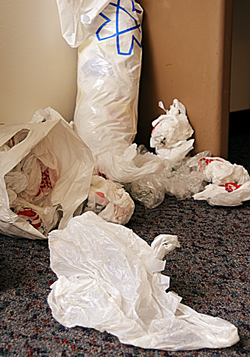 Grafman reached out to HSU alumna Sarah Schneider (Environmental Policy, ’10). Schneider had been active in several campus organizations concerned with energy, water and the environment, including HSU Takes Back the Tap and the Alliance to Save Energy’s Green Campus Program. After graduating, she went to work in a competitive job with the city of Arcata as the Energy Program Specialist.

Although she wasn’t working on the project directly, Schneider knew the Arcata City Council had been discussing a potential ban on plastic bags. “The City has multiple waterways (creeks and streams) that drain into the Arcata Bay, and plastic bags often find their way into the Bay via storm drains that are connected to these many waterways,” she says.

Students set to work researching as much as they could about plastic bags. Topics included the embodied energy of different types of plastic bags; which local businesses distributed the bags; energy used to transport the bags; effects on wildlife and the results of other cities that enacted similar bans.

Although the student research is not a legal document like an environmental impact report, it does contain customized information that the City Council might not have otherwise had access to.

“This is about doing things that wouldn’t get done without students,” Grafman says. “The city would have had to use national information without local context.”

While the “Arcata Plastic Bag Project” was the first time Grafman has partnered with the city of Arcata for a class project, he hopes it won’t be the last. Projects with real-life consequences, he says, are valuable to students’ educations. “Students aren’t just spinning their wheels. They’re spinning their wheels and making traction.”

At this point in time, city staff has received the class’ compiled research, complete with interactive data input. No decision on the citywide ban has been reached but there is City Council direction to begin talks with Humboldt Waste Management Authority on the prospect.