The Fools of April: Paintings and Mixed Media Sculpture by David White

Humboldt State University First Street Gallery is pleased to present The Fools of April: Paintings and Mixed Media Sculpture by David White. The exhibition will be on display from April 6th through Sunday, May 19th, 2013. 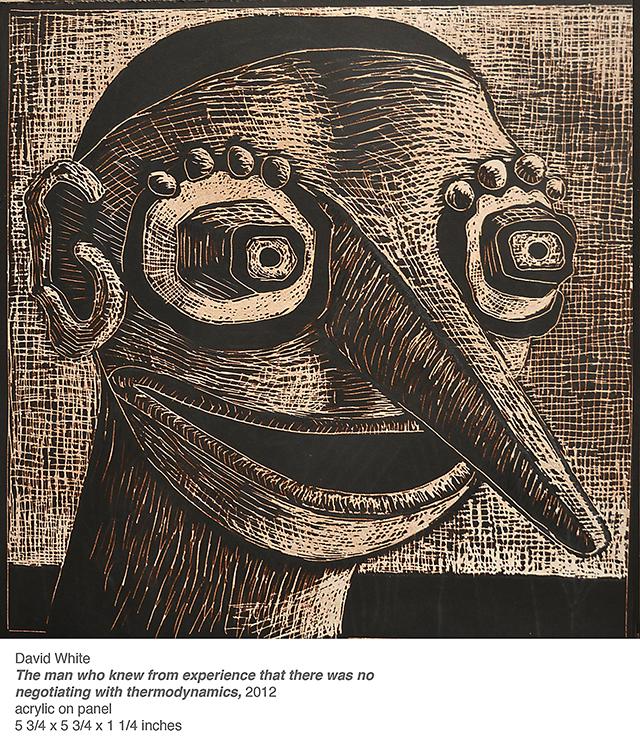 An alumnus of Humboldt State University, David White is a Northern California artist best known locally for his permanent installation in Humboldt State University’s Art Department. After graduate school, he practiced his art in New Mexico and then lived in Japan for 15 years where he taught English and Art in Nerima, one of the many districts of Tokyo. He has exhibited his art in the Nerima Museum and several galleries around Japan, as well as the United States. His most recent show was a collaborative project with the artist Lush Newton in 2011 at HSU First Street Gallery.

At the core of this exhibition are puppet characters, which White has created, fashioning them from found materials. Based on these small puppet characters, he has drawn and painted portraits and created sculptural busts, while loosely tying them together with an interplay of pictorial associations and internal narratives. In a sense, he has grown a community of characters who have taken over the gallery. They are wise guys, grifters, dames, poets, losers, lovers and raconteurs. White is influenced by his past experiences and surroundings, and frequently incorporates them into his work. He loves story telling and each of his pieces represents a character integrated into his community of April Fools.

His new exhibition reflects his playful nature, but also adds a serious note into the mix through the titles of the pieces. Within the show visitors will find themselves in the company of many characters; some are puppets, some are sculptural and others are in portrait paintings: each one highly colorful and with a unique personality. These characters lead the viewer through the gallery, radiating lightheartedness and cracking jokes between each other. A majority of the pieces have titles that start with the words, “The man who…, and then White fills in the remainder of the title with a free associated phrase inspired by the character he is depicting.

For instance one piece is titled, “The man who was tired of perpetual war.” His method of titling pieces was inspired by titles of films and books like “The Man Who Knew Too Much” and “The Man Who Would Be King.” While the pieces themselves are completely blithe and spirited, the titles are meant to portray the uncertainty of the times and modern life.

White is known for using alternative material for his art making. He creates art out of recycled and found objects, for they are highly accessible and allow him to freely make art anywhere at anytime. This idea of accessibility crosses over from his process into his intended audience for the show, which is everyone. White designed this show for all ages. He doesn’t want to limit it to certain audiences or groups, and hopes that everyone will be able to stop by and enjoy The Fools of April. White compares his show to that of a carnival, of which he is the ringmaster, cheerfully beckoning, “Come one, come all.”

White will give an artist’s talk on May 4th at 3 p.m. at HSU First Street Gallery. The public is invited to attend for free and meet the artist.

HSU First Street gallery is open Tuesday through Sunday from 12 to 5 p.m. and is located at 422 First Street, Eureka, California. Admission is free. Those planning group tours are encouraged to call ahead. For more information call (707) 443-6363. To learn more, visit humboldt.edu/first.