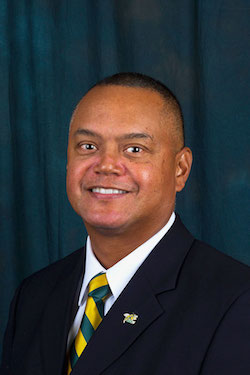 “There are few institutions that are as closely tied to the success of their respective communities as HSU. A degree from HSU can lift the life of the person earning it as well as the lives of their family, and those degree holders drive the success of the entire North Coast,” said Jackson. “I welcome the opportunity to work with HSU’s talented faculty and staff, alongside community members, to ensure that those life-altering opportunities are expanded for current and future students.”

Jackson becomes the eighth president of HSU and the first African American to serve in that role. He will join the campus in his new capacity in July. Jackson succeeds Lisa Rossbacher who will be retiring at the end of June 2019 after serving as HSU president since 2014.

“Dr. Jackson has been an inspirational leader who has demonstrable success at the highest levels of university administration,” said CSU Trustee Peter Taylor, chair of the HSU search committee. “Throughout his career, he has been a champion for access, quality and student success, all hallmarks of the HSU mission.”

Jackson earned an associate’s degree from Highline Community College, a bachelor’s degree in business management/personnel from Southwest State University, a master’s in counseling/student personnel from Shippensburg University and a doctorate of education from the University of La Verne. A first-generation student, Jackson is also a veteran of the U.S. Coast Guard Reserve, Army National Guard, Texas State Guard and Indiana Guard Reserve.

About the California State University
The California State University is the largest system of four-year higher education in the country, with 23 campuses, 52,000 faculty and staff and 481,000 students. Half of the CSU’s students transfer from California community colleges. Created in 1960, the mission of the CSU is to provide high-quality, affordable education to meet the ever-changing needs of California. With its commitment to quality, opportunity, and student success, the CSU is renowned for superb teaching, innovative research and for producing job-ready graduates. Each year, the CSU awards more than 125,000 degrees. One in every 20 Americans holding a college degree is a graduate of the CSU and our alumni are 3.7 million strong. Connect with and learn more about the CSU in the CSU NewsCenter.