Beginning in March, the Bookstore and all campus marketplaces and eateries will be plastic bag free, thanks to a phase out started earlier this month. The move makes HSU one of just a handful of universities around the country to eliminate single-use plastic bags on campus.

"I am proud of our students’ work to improve our community, and committed to taking steps here on campus to minimize our impact on the environment," said President Rollin Richmond in a message to campus about the change. "This is the latest example of Humboldt State's leadership as a sustainable campus."

“Doing our part to eliminate an item that has such a low national recycling rate and is ubiquitous in marine and land trash is a great thing,” added T.C. Comet, Director of HSU’s Office of Sustainability. 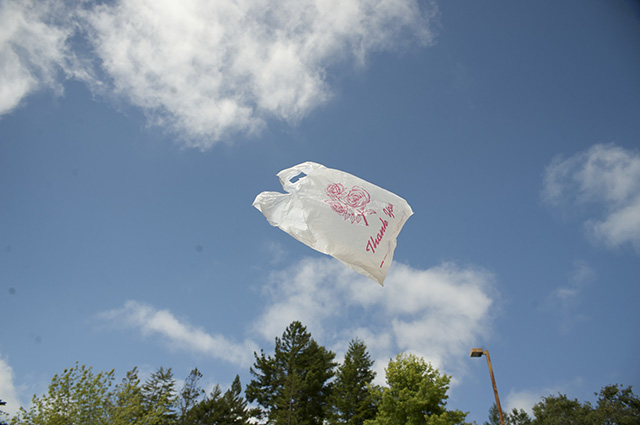 To demonstrate solidarity with the city, HSU enacted its own ban. The university’s phase out will be similar to Arcata's and occur in stages. In March, the university will begin charging 10 cents per large paper bag. Eventually, the campus bookstore and eateries and marketplaces—like the “J” Cafeteria and the Depot—will sell reusable tote bags. Small paper bags for gift items and snacks will remain complimentary.

“There’s been a lot of research showing that when plastic gets into the ocean, sea creatures get tangled in it or mistake it as food,” says Winkler. “In addition, it takes a substantial amount of energy and raw materials to make single use plastic and paper bags.”

In 2011, HSU students found that Arcata shoppers use between 3 and 5 million plastic bags annually—the equivalent of having 774 desktop computers on eight hours a day for a year. The research was part of the “Arcata Plastic Bag Project,” which helped inform the city’s decision on the plastic bag ban.

In going plastic-bag free, Arcata joins close to 90 cities and counties in California that have banned plastic bags, according to Chico Bag, a reusable bag company.

“When we heard of Arcata’s plastic ban, we wanted to get involved right away,” Adamski says. “This is an eco-friendly campus and community and we're committed to doing our part.”