What’s in a Rename? A Building that Honors the Wiyot People and Land

To honor the Wiyot land where Cal Poly Humboldt sits, the University officially renamed its student union the Gutswurrak Student Activities Center in a ceremony at the building on campus. 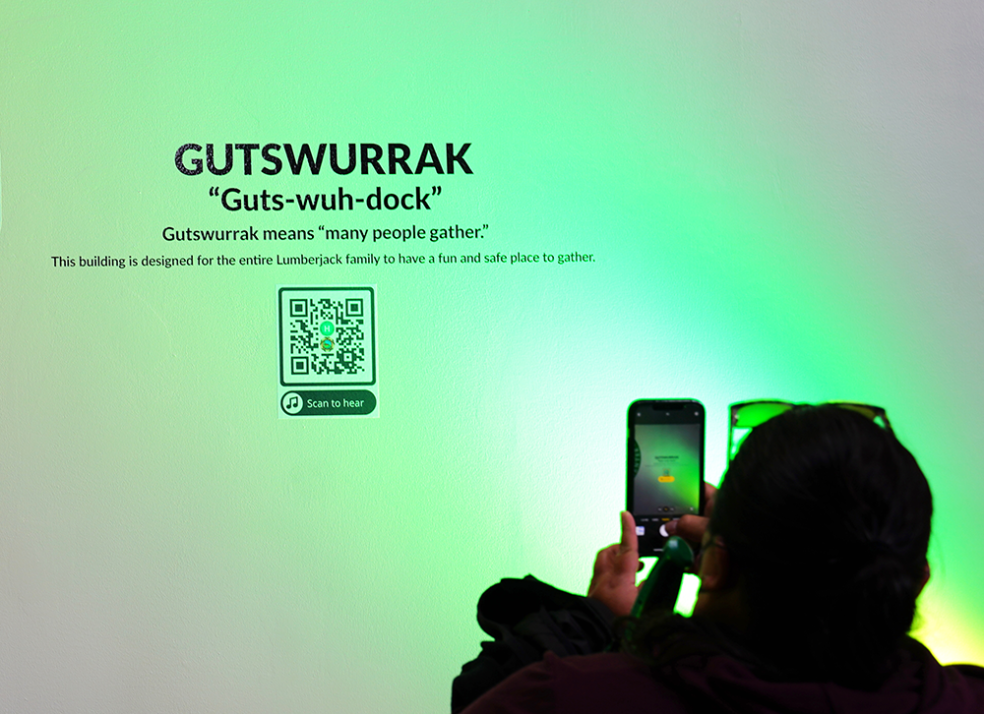 Listen to Wiyot adults and youth pronounce “Gutswurrak” by scanning a voice recording QR code that’s now on the wall of the Gutswurrak Student Activities Center.

To honor the Wiyot land where Cal Poly Humboldt sits, the University officially renamed its student union the Gutswurrak Student Activities Center in a ceremony on Wednesday at the building on campus.

Gutswurrak—pronounced "guts-wuh-dock"—is the Wiyot word for “many people gather.” It recognizes the importance of the center as well as Cal Poly Humboldt’s location on traditional Wiyot land.

The name was suggested by members of the Wiyot Tribe led by Wiyot Tribal Chair Ted Hernandez, a guest speaker at the event. He expressed his gratitude to the University and to students, who initiated the renaming effort.

“Today we are here at Gutswurrak, our new center, and it’s a place where we gather. So thank you all for allowing us to be part of this, for students for taking the charge for making this happen as well,” said Hernandez. “I just offer many blessings to this building and to the students that come here now and in the future.”

President Tom Jackson, Jr. emphasized the importance of relationships between the University and community partners and collaborating with Hernandez on the renaming effort.

“From the very beginning, we’ve talked literally about how we can improve not the relationship alone, but the quality of life for our students and the people within this area. And in large part that's why we’re here today because there was great trust between the two of us in extending this opportunity for our name,” said Jackson. “Thank you for your friendship and your support.”

Other speakers included Jason Meriwether, vice president for Enrollment Management, and Adrienne Colegrove-Raymond, a member of the Hoopa Valley Tribe who was recently appointed special assistant to President Jackson and will oversee Tribal and community relations.

Colegrove-Raymond also unveiled a new feature of the building: a voice recording QR code. Posted on the wall of the SAC, the code links to a recording of Wiyot adults and youth pronouncing “Gutswurrak.”

The building’s new moniker is the result of a collaborative process between the campus community and the Wiyot Tribe. Students and members of the SAC Advisory Committee—which was created to reimagine the activities and services offered in the Gutswurrak—requested to name the center in honor of the Tribe. Students felt that it would be valuable to have a name that celebrates the home and culture of the Wiyot people.

Three possible names were suggested, and numerous groups and individuals were consulted on the name that was ultimately selected. They appreciated the meaning of the word for “many people gather” and how it reinforces the idea of the center as a place for the entire Lumberjack family.

In partnership with the College of the Redwoods, the University has adopted a formal land acknowledgement. It reads:

"We acknowledge that the land on which Cal Poly Humboldt is located is unceded territory of the Wiyot people who continue to live and thrive today. It is surrounded by the traditional, ancestral, and present homelands of several indigenous nations including the Hupa, Karuk, Mattole, Tolowa, Wailaki, and Yurok that make up Humboldt County."

Cal Poly Humboldt is the northernmost campus in the California State University (CSU), located in a rural area 270 miles north of San Francisco. Humboldt’s stunning natural environment is both a natural laboratory and a great place for adventure. The University offers students a unique experience through a mix of academic programs, hands-on experiences, and commitment to social and environmental responsibility. A leader in providing college opportunities for Native American students, Cal Poly Humboldt has the highest percentage of Native American students in the CSU. The University was the first CSU campus to offer a baccalaureate degree in Native American Studies and offers a graduate program in social work that focuses on the needs of indigenous communities and a first-of-its-kind minor in American Indian Education.

This naming of the Gutswurrak Student Activities Center, a Wiyot name selected by the Tribe, symbolizes a conscious effort to bring Native languages, histories, and culture to the forefront of the University.