Wildlife biologists often espouse the importance of biological diversity, but what about diversity among wildlife biologists? HSU students and an alumna, plus a student from UC Davis, were determined to answer that question by creating a documentary film.

Wildlife biologists often espouse the importance of biological diversity, but what about diversity among wildlife biologists? HSU students and an alum, plus a student from UC Davis, were determined to answer that question by creating a documentary film.

Their project underscores the call for more diversity in science, technology, engineering, and math (STEM) fields. According to a study by the Pew Research Center, even with the increase in STEM jobs in the U.S. over the last few decades, African-Americans only make up 9 percent of the STEM workforce, while Hispanics make up 7 percent. The overall number of women in STEM occupations has increased, especially in healthcare. Even so, they remain underrepresented in computer science and engineering jobs.

To support and encourage more historically underrepresented students in STEM fields, Humboldt State created a place-based learning community called Klamath Connection for first-year students. Launched in 2015 and funded by several grants, the science program has a built-in support network of students, staff, and faculty to improve a sense of belonging and boost academic success. It’s now one of several HSU science learning communities: Stars to Rocks for incoming Chemistry, Geology, and Physics & Astronomy students and Rising Tides for Marine Biology and Oceanography students.

HSU alum Bayan Ahmed (‘18, Wildlife), co-producer of the film, leads the TWS-WS diversity committee and helped pull together the team that includes Jaclyn Aliperti, who is pursuing her Ph.D at UC Davis, and HSU Wildlife majors Korinna Domingo, Christopher Collier, and Ximena Gil. 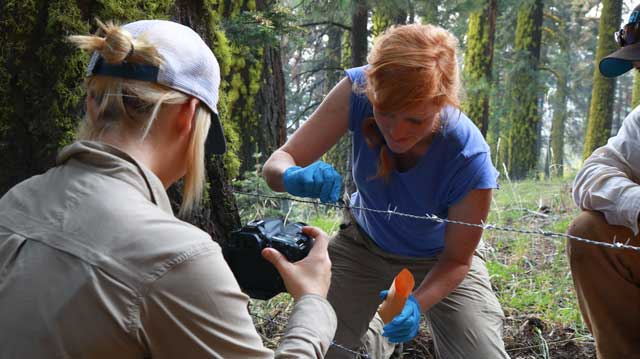 The most rewarding aspect of the project, says Ahmed, was hearing everyone’s stories and learning about the different barriers they have had to face. “It really goes to show that we all have struggles that we have to overcome when pursuing our passion.”

“Science is enough of a barrier for anyone, so if you have extra barriers beyond that, it makes it that much harder,” he says in the film. “So one of my jobs is to try to lift those barriers and make it easier for students to find the success they want to have.”

Domingo believes diversity and inclusion are more than good practice. They’re vital for the future of the wildlife field.

“In order for the wildlife field to remain relevant in an age of rapid change we have to diversify,” she says. “Scientists need to increase access to scientific information and extend outreach efforts to underrepresented communities using creative methods. Youth need role models, and we need diverse perspectives.”

What does diversity mean to you? Share your thoughts using the hashtag #DiversifyWildlife.