A Humboldt State student and recent graduate have been recognized for their creativity and talent across California State University at the 30th annual CSU Media Arts Festival. 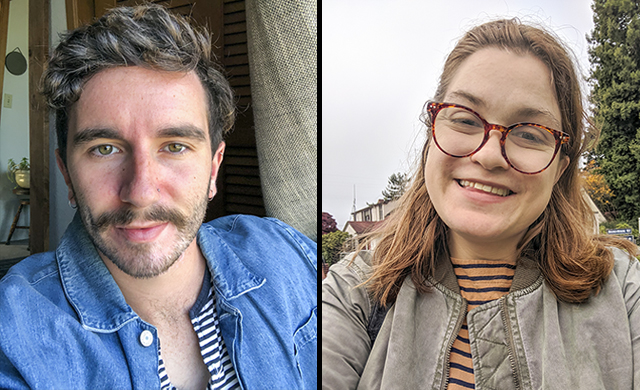 Established in 1991 to support students studying film, broadcasting, video, screenwriting, and media, the competition helps bridge the gap between students and working professionals by providing critical review of student work from industry leaders.

Davis, a Film major, penned a sci-fi dystopian horror screenplay that he initially wrote for his Writing for Film class with David Scheerer. Titled, “Happy Birthday, Eve,” the screenplay tells the story of Alea and Javar, a young couple expecting a baby. After moving into their new home, the couple finds a vault containing a frightening message from their future daughter, Eve.

“After the positive feedback from the competition’s judges, I hope to continue writing ‘Happy Birthday, Eve’ into a full-length feature film,” says Davis. “I usually write non-fiction, but I wanted to explore my creative side and horror is my favorite genre of film.” After graduation this Spring, Davis plans to continue writing.

Peterson, a film major who graduated last Spring, originally wrote her screenplay, “Aperture Adventures,” for a timed exam in a screenwriting seminar.

“My story is about an elderly couple who leaves a photo store after developing a 67-year old roll of film. “Upon looking at the photos, they discover an interesting family secret in the background,” explains Peterson.

Peterson has studied photography since high school and enjoyed creative writing since childhood. “Sometimes my writing can be whimsical and unconventional,” says Peterson. “I often wonder if my writing will click with readers—this time, it did!”

Currently, Peterson is applying to graduate school and trying to squeeze in creative writing whenever she can. She says it feels very rewarding to be recognized among university students across California.

Of the 129 submissions to this year’s festival, Davis and Petersons’ screenplays were among the 30 prize-winning finalists. Festival director Shannon Pringle explains that pivoting the 30th annual event to a virtual platform was challenging but an overall success.

“This year’s competition and awards ceremony was extra special thanks to everyone’s willingness to adapt to something new,” says Pringle. “We’re so proud of all our winners.”