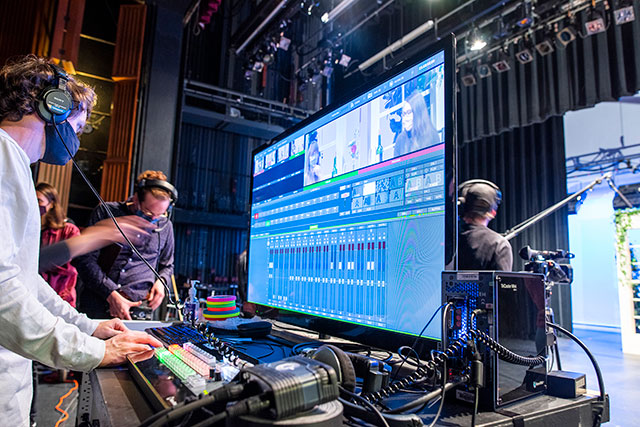 “Filmmakers create cinematic stories to share them with others,” says Ann Alter, film professor. “Seeing one’s film with an audience is what it’s all about. Films are meant to be seen together, in a dark theatre with a community of people who laugh, cry, gasp, shout out loud and react to the films with a range of emotions.”

Films in the showcase will vary from 30 seconds to 20 minutes in length and will include a wide range of topics, genres, sensibilities, and perspectives. The 90-minute program will highlight these diverse films that encompass the strengths and values of the film program at Cal Poly Humboldt. The screenings will be selected from the exceptional work that has been produced over the last two years.

The evening will include the award-winning film Aviary, directed by Lauryn Blottin (’21, Film), about a woman dealing with agoraphobia (the fear of leaving one’s house), who must conquer her anxieties when her grocery delivery is placed too far from her comfort zone. Sarah Bowyer (’21, Film), appearing in the film, was recognized with the Best First-time Actress Award at the Luleå International Film Festival, Sweden, in 2021.

Students have been making films at Humboldt since the beginning of the Humboldt International Film Festival in 1967. Film became an academic major in 2013. Today’s students work in 16mm and Ultra High Definition Digital formats.

Don’t miss this chance to show support for the courage and integrity of these student filmmakers to share their stories, develop their voice through a cinematic lens, and fight for their unique vision to be shared on the screen to a larger audience.

The Student Filmmaker’s Showcase takes place in the Van Duzer Theatre at 7 p.m. on Thursday, March 3. Admission is free. Proof of COVID-19 vaccination (including a booster shot), a negative test result, or Cal Poly Humboldt ID will be required for entry. Recommended for high school age and older. For more information, please call the Department of Art & Film at 707-826-3624 or visit film.humboldt.edu.