Student filmmakers speak with a police officer during the making of their documentary on homelessness.

“Homeless in Humboldt: In the time of Covid-19” is the culmination of hundreds of hours of work from the documentary team of Gabe Kim (Journalism, 2021), Valentina Dimas (Environmental Studies major/Journalism minor ’21), Rachel Marty (Journalism), and Skylar Gaven (Journalism), who have been working on the project for the past year. The multi-episode documentary follows the lives of Humboldt-area homeless men and women during the worldwide pandemic.

You can watch the series on YouTube. Additional episodes will be released in the spring semester, with plans for a public showing and Q&A with the documentary team sometime in spring as well.

Kim developed the documentary series to be included in a project called “Humboldt in the Time of COVID”, a multidisciplinary collaboration to archive the experience of the local community during the pandemic, and to give students hands-on work when much of the University and community were pivoting to virtual. 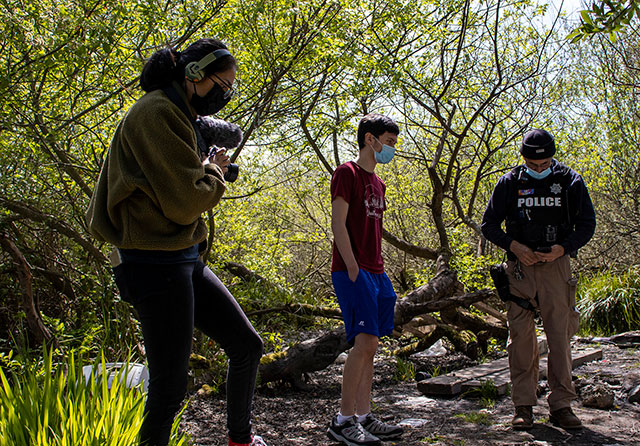 “It really grounds me in the world that these houseless individuals and couples are living in isolation and this documentary brings me closer to them, not in an intimate way, but a compassionate one,” Kim says. “We often see people begging on the street or curled up in a ball and we just walk by and don’t give it much thought. It feels like a breath of fresh air because I’m getting to see what it’s like to live in a different world.”

To complete the series, the documentary team spent many months traveling to Arcata, Eureka, Orick and Willow Creek and other locations to speak with their sources, all on their own dime. Students spent hours talking with people experiencing homelessness, letting them tell their own stories, including a homeless person named JP.

“I find it empowering to see the crew and all of us do things that I didn’t realize we had the ability or resources to do initially,” says Dimas, an Environmental Studies major with a journalism minor. “It’s really nice to see all these people come together and help one another, from our advisers helping us, to sharing JP’s story and helping transmit his experience on the screen”

Other students helped work on the documentary include Journalism major Jerame Saunders, History major Jessica Stahl, and Communication major Lupita Rivera Cid. Journalism professor and faculty adviser Vicky Sama says COVID-19 made it challenging to do anything, especially a documentary.

The students had the extra challenge of trying to find subjects for the documentary while taking extra safety precautions so that they could also be on the streets and see the lived experiences of the homeless so they could tell the true stories,” Sama says. “They have been so kind and compassionate and considerate of the people they’ve talked to on the streets. The hardest part for them may be when the project is done.”

To learn more about the making of “Homeless in Humboldt: In the time of Covid-19”, visit homelessinhumboldt.wordpress.com.